I don't quite even get what that title means but it was all over an exhibit I saw at the Tokyo Opera City Art Gallery.

I'm not 100% sure what the exhibit's point was but there were several parts. The first was a very large screen with video projected showing some part of Tokyo as seen from above very similar to Google Maps satellite view. The difference where was it as supposed to be a time lapsed video showing the city changing over time, buildings demolished and new ones built etc. I can't imagine it was real but I suppose it could have been.

The next part had normal size TVs showing videos. All of them shared a team but each had a different piece of a story to tell about how Tokyo has changed over the years.

First off they pointed out that the average lifetime of a house in London is 140 years. In the USA it's about 104 years. In Tokyo it's only 26 years. In other words, in the 70+ years since World War 2 almost every building in Tokyo has been demolished and something new build 3 times over! 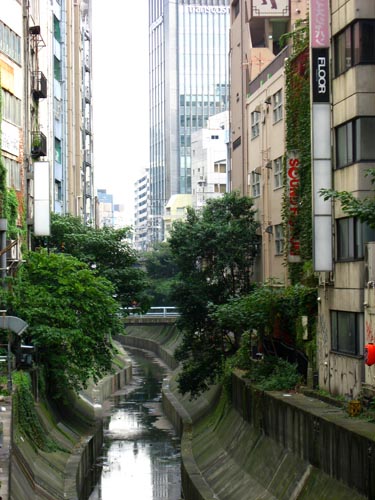 That exhibit showed pictures of Cat Street which is actually one of my favorite places in Tokyo. It's this winding road that goes from Shibuya through Harajuku with no car traffic and lots of cool boutique stores and cafes. Well, according to the video that street used to be Shibuya River. At some point in the past it was covered over and then zoned for stores and over the years the buildings along it have been rebuilt many times. It was neat to see all the changes. They called Cat Street one of the best example of "commeridence" (actually I don't remember the world they used. It was a combination of commerce or commercial with something meaning "place to live". I don't think they were putting it down at all. In fact I think they thought it was a good thing. The neighborhood is quiet and a nice place to spend time and yet it's also got houses right behind all the stores.

Another video talked about how in the 1920s, most houses in Tokyo were single family homes, relatively large with a garden. Probably the kind you seen in old movies with very beautiful inner gardens that are viewable from the house. Over the years the property taxes on the land increased to the point that people had to sell off part of their land to afford to keep living there. It was implied, or maybe I inferred, that the government did this intentionally to divide up the land among more people, each time the land was divided new construction would happen on the sold land and so now most houses are 1/3 the size they used to be or at least occupy 1/3 the land as they did 80 or 90 years ago. They are taller now so they might actually have the same amount of living space. They called this process of subdividing the houses "subdivurban".

The 3rd video probably had the most interesting idea. There was a big fire in Tokyo a long time ago. The fire burnt down most of the city. In order to prevent a fire from taking out so much of the city again, as they rebuilt the city they followed a specific design. They widened all the main streets making it harder for fires to jump across. Then they zoned just the area next to these main streets as commercial/business areas. The result is that each large city area is an inner neighborhood of individual houses surrounded by large "fence" of more fireproof buildings. That's very different from say NYC where the blocks are very small and it's all buildings. Or from say Paris where it's almost all homogenous types of buildings. Instead Tokyo has this "urban village" feel. Going down the main streets of Tokyo it's like a metropolis but step behind the buildings and you find individual family homes. I think that one of the ingredients that makes Tokyo feel a lot different than many other cities.

Much of the rest of the exhibit was about the architecture of some very modern designer Japanese houses and apartments designed to make them feel open, interesting, livable, etc all while being crammed into small spaces or in large apartment complexes.

Some other random things from the exhibit. 124,000 new houses are build every year in Tokyo compared to 43,000 in NYC and 20,000 in Paris. Another was that 2.5 billion cubic meters of rain fall on Tokyo every year but Tokyo only consumes 2 billion. That stat was attached to an idea for putting tanks under houses to collect rain water for each house. 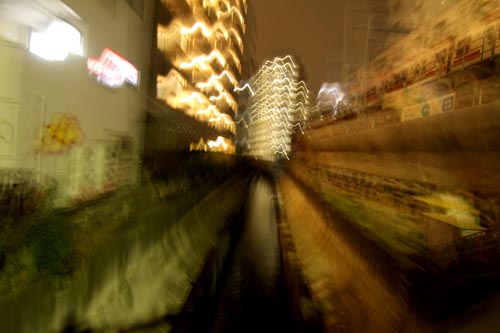