I'm basically a shy guy and even in America I would rarely go to a restaurant alone but now I'm here in Japan and I don't really have any friends that I hangout with after work.   I need some conversation because I need to practice my Japanese but of course not speaking well makes it even harder for me to decide to do something which requires me to be outgoing.

So, I finally worked up the courage to go to the local ramen shop.  It's just around the corner from my apartment.

Here it is at night, the normal time I'd be there.  In fact I can usually only go on a Monday or Wednesday after Japanese class because that's the only time I get home before they close.  That's usually around 10pm.

So the first thing I found out is that you don't order from the employee's  You go over to this vending machine, put money in and buy tickets.  This is actually a fairly common setup especially for places in train stations.  For example the first 3 buttons are for different kinds of ramen noodles.  They are kind of like pasta where you can get angel hair pasta or spagetti or spagatini etc.  The basic noodles at this store cost between 600 and 700 yen.

Then your order extras like charshu (BBQ pork) 250 yen.  Tamago (a hard boiled egg) 100 yen.  Nori (seaweed) 100 yen.  etc.  I can easily spend 1200 yen for a bowl of soup.  It better be pretty good.  The machine gives you one ticket for each item.  When you're finished you hand all the tickets to one of the people behind the counter.  You don't even have to talk!  That was the whole point of me going here.  Oh well.  It was super delicious so I've gone back about 5 ot 6 times already.  I tried all 3 kinds of noodles.  I like the thicker ones the best.

There are these HUGE pots where they make the broth.  Every 30 mintues or so somebody has to strain the broth from on pot to the other.  Then they strain a little more and through out the ingredients.  I don't know how long that stuff's been cooking but it a really large pot.

Behind the bowls you can see all the extras as well as a place with a bunch of small baskets sitting in hot water.  That's where they heat your ramen noodles.

Here's the menu.  Below the menu are two flat boxes full of fresh ramen noodles.

And here is one of the girls that works there.  I've been there 5 or 6 times and everytime different people were working there.

Here's all the fixins you can add after you get your ramen.  They are: some kind of hot red stuff, ground ginger, black pepper, ground garlic and of course shoyu (soy sauce).

So I found out from my friend Natsuko that although the Japanese like ramen they do not consider it to be a healthy food which I strange because I always thought in America we thought it was healthy.  Maybe it's all relative.  Compared to American fast food it's got to be better for you. 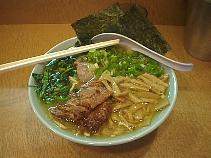 And here's my ramen!  Oishisoo!*

Maybe if I keep going I'll make a new friend.  Hopefully it will be that girl in the picture.