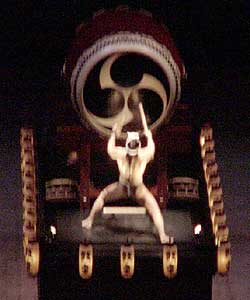 Recently I was really lucky to have my friend Keiko invite me to see 鼓童 (Kodo).  I guess that might be loosely translated as Drum Children or Children of the Drum.  They are a very famous wadaiko band (Japanese drums).

All I can tell you is if you have a chance to see them GO!  They are totally awesome!

I've never played the drums or any instrument for that matter but they way the play it seems like they must be some of the most fit people in the world.  They aren't just swinging with their wrists like playing a snare drum they are swinging their entire arms sometimes from far above their head to below their waste.  Sometimes so fast their arms are just a blur.

They played all kinds of wadaiko from the giant drum you see above to relatively small ones like the one on the center right below.

There were parts where they played so quiet couldn't imagine they could consistently hit the drums so lightly then the would get so loud I thought the tiles might come off the ceiling.

In another part through perfect synchronization between 8 drummers they made sounds like water drops hitting a pond and other effects as well.  Incredible!

You can see the guys below are practically doing sit ups the entire time they are performing!

They sell CDs but unless you have the ultimate sound system where you can crank it up I'm sure it doesn't compare to the real thing where you can feel the drums with your entire body. 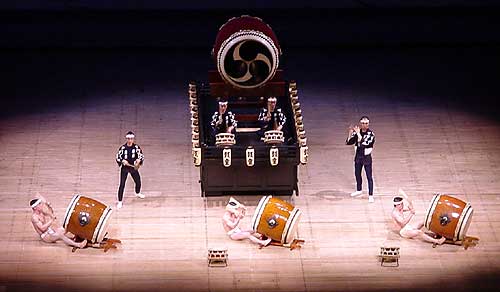 They have toured the world before so if they come to your area and you get the chance go check them out.