An Izakaya is a Japanese style bar.  When you hear that Japanese businessmen go out drinking every night an Izakaya is were they go.  I don't have much experience with bars in the U.S. but so far I really like Izakayas.  They have all kinds of food and they serve it in small usually pretty cheap portions so you can try lots of different things.

On of my favorites is Tsubohachi which is a very large chain.  I think there is a Tsubohachi Izakaya near practially every train station. There's one near my station and one at the next station.  There are two or three of them in Shinjuku.  My friend Mark first took me to the one in Akasaka which is kind of the business district of Tokyo.   He says it's not a good one but then I like it because it seems to have a little more variety of food them many.  Here's the menu. 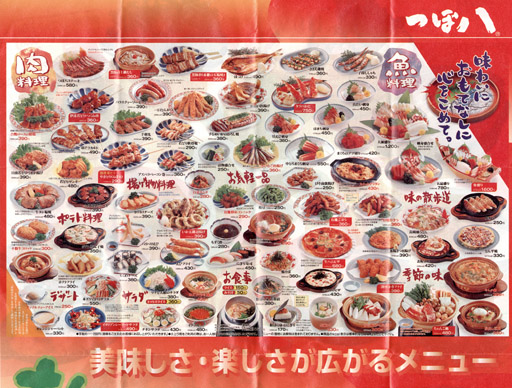 I suggest you click on the picture and scroll around the big version of this picture.   Warning.  It's a BIG file.  About 1.5meg.  But on the big version you can see all the different kinds of food and the prices.  The prices are in yen and one yen is about equal to 1 penny so if it says 300yen that's 300 cents or 3 dollars.

This is the drink menu at Tsubohachi.  Izakayas are usually very loud places and you can often hear people playing drinking games with their co−workers.

I think most Izakayas are similar but they all have different menus and specialize in different things.

So far the best one I've been to is the one at the Nikko Hotel in Kawasaki.  You can read about it here (Random Stuff)

Tags: japanfeature
Comments
I really don't get the point of .plan files
Hmmm