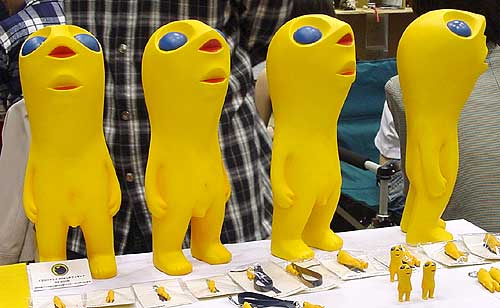 It's May and time for another Design Festa and as always there was lots of cool stuff and cool people.

Above you can see Yellowboy!  My friend Yasuko bought one of the small ones and added it to her cell phone.

Here you can see some Cube−Animals.  This guy had Cube−People and posters of all of them too. 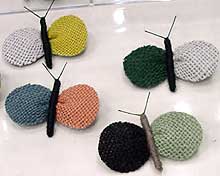 There were also these Chou-chou (butterfly) hairpins. 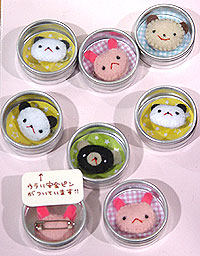 And these itty bitty pins.  I don't think you could fit a quarter (25¢) in one of those cases so they are pretty small.  All of them handmade, stitched together. 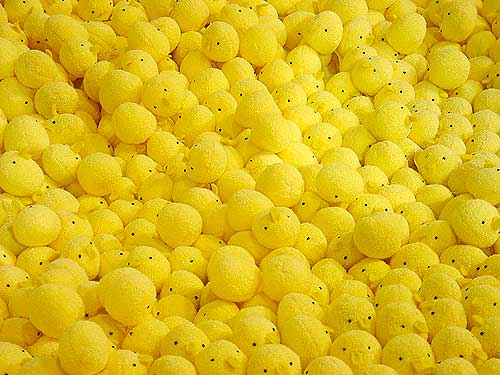 These teeny weenie chickies were the first thing we saw when we got to the show.  They were quite popular.  Each was probably an inch in diameter and there was a whole table full of them.  Maybe 6x4 feet.  The ladies that made them were probably raking in quite the dough at $3 per chicky. 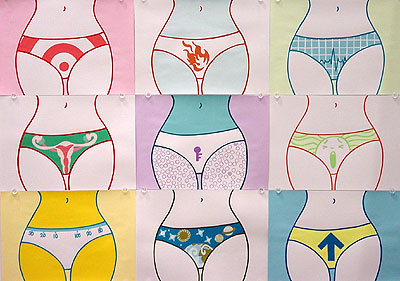 Here are some interesting postcards 😉 made by a couple of women.  Maybe I should have picked up a few...   the postcards, not the women 😉  .... or the other way around. 😛

The strangest thing I saw was probably these: 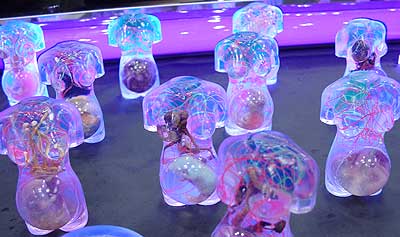 They are clear pregnant rubber dolls with organ parts and veins but that's not the strange part. 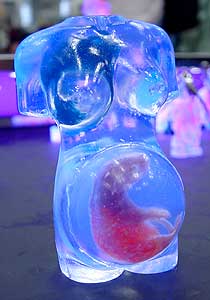 Each one had an ACTUAL DEAD RAT in the womb.  Not a model of a dead rat, not a plastic dead rat.  A real, previously living rat baby.

Otherwise, this time at this Design Festa I concentrated more on some of the people at the show.

This guy had made quite a few paper constructions.  In particular he had made a dalek from Dr. Who.  I guess though I was one of the few people that had heard of Dr. Who because I guess it's never been aired in Japan. 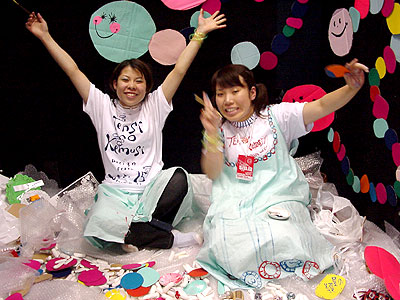 These two girls just seemed to be hanging out, making cardboard balloons and waiting for people like me to ask to take their picture. 😃

This girl was doing both the Goth thing and makeup.  Her own makeup featured 2 extra eyes on her face made from rubber or latex.  There were a couple of make up artists their doing cuts, gashes and other kind of interesting things.

These two girls had created the bust on the right.  And "bust" is the correct word I think. 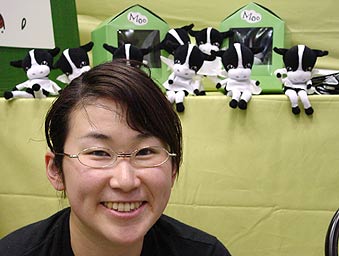 This girl had made the little cows in the background.  She also had an eh-hone or picture book that was kind of cute.

A few of the bigger displays were: 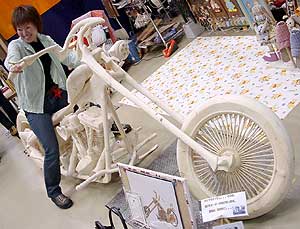 This bike.  It was entirely carved / built out of wood. 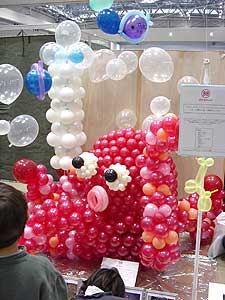 A balloon sculptor was there.  She has a homepage with pictures of other things she's made. 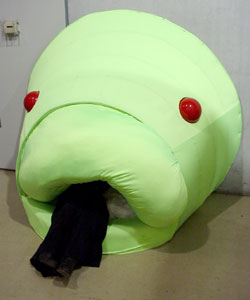 Here my friend Yasuko is getting eaten buy a green manatee. 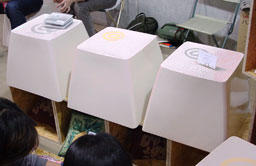 These were keyboard key chairs (stools).  They all had @ signs on them.

This is a Family Computer, in Japan better known as a Famicom and in America better known as the Nintendo Entertainment System or NES.  The American version had a much more boring design.  The Famicon is to Japan like Atari is to America meaning that kind of like here and there you can find Atari symbols on t−shirts and rave posters etc in America, in Japan the symbols are based on the shape above.  From different people I saw t−shirts, stickers, etc with this thing drawn on them. 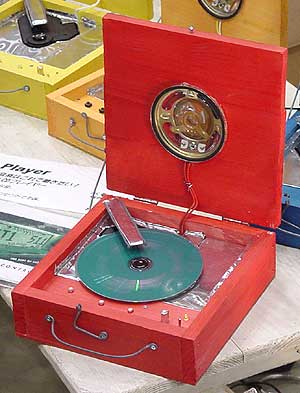 This was kind of cool.  It's a CD player.  The needle arm is just for looks but the CD player is connected to that small speaker with the paper torn out so if you play a blues tune or something that sounds like a slightly older style it comes out sounding like an old scratch 45 being played on a 50s record player.

This was probably the single thing I wanted most to hang up or something.  It was a painting about poster size, maybe a little larger that some girl had drawn.  She had 3 of them.  If it's not obvious it's all butterflies but there's a panda hidden in the image.  The farther you get from it (or the smaller the image) the easier it is to see.  Full size and the effect was much more subtle.  She also had a giraffe and a zebra.  My impression was she was getting alot of interest but unfortunately she was just showing them, she hadn't made any postcards or posters.

There were a few interesting observations.  It's getting easier and easier to make your own stuff.  For example one thing I saw more of this time was self printed stickers. From several companies you can buy glossy Purikura size printer stickers.  Other than the fact that they only come in rectangular shapes with rounded corners many of them were very cool.  In fact I bought 2 sets.  I also saw some round ones so I'm pretty sure some companies make round ones too.

I also saw there is a new kind of printer paper for making t−shirts.  The old kind looked were okay but after printing they appeared a little dull.  The colors were not that bright and unless your design took that into account it was clear they were made on a printer.  But we saw a few that we were sure were silkscreened but when we asked, the girl said that there's a new kind of paper out and when ironed on it looks like paint.  The colors are extremely bright and they are thick like silk screening.  Thick enough that you can use them on black t−shirts with no problems.  Now they just need to make it a complete process.  Press print, it prints the image, cuts out the areas you want cut and puts it on the shirt 😛

I also saw that printer I mentioned before.  They had examples of it printing on all kinds of stuff.  Floormats, venetian blinds, cloth etc.  Maybe that's all I need for the t−shirts 😉

The other thing that came to mind seeing all the stuff is wondering if this whole movement, the ability to make much of this stuff more and more easily, will have any effect on the world as we know it today.  One example would be Sanrio (Hello Kitty).  It could basically be argued that they are one of these people that became super successful but Sanrio started when this stuff took more investment.  Now it's generally easy to at least get started.

The other thing that I noticed is just how big Flash, Computer Graphics and Video editing are.  Lots of people had notebook computers setup in their booth running animations they had made about their characters.  The majority were Flash based.  After that it was probably video editing using something like Adobe Premiere, After Effects or Video Vegas or probably i−Movie.

If you missed them you might want to check out my previous Design Festa experiences.