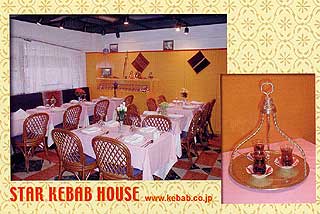 Disclaimer: I'm friends with one of the people that works here.

He was in my Japanese class and he would often try to get us to come check out is restaurant.  Particularly when they were having a special all you can eat night.  The only problem was it was 4000 yen (about $35).

That price would probably startle an American but to be honest that's pretty normal here in Tokyo.  If you go to pretty much any restaurant that is not Denny's or fast food expect to spend at least 3000 yen a person.  For example the average bill at TGI Fridays in Tokyo is 3000 yen a person.

Well, one day some of my classmates and I were out playing and we were wondering where to go do dinner and I just decided, "we're going to that Turkish Restaurant!".  I called our friend up and he said to come on over. 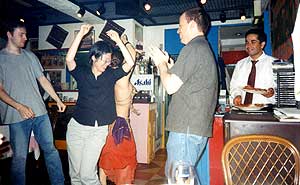 It's not a fancy place.  In fact walking in it's pretty clearly a family business.  But, DANG! it was good!  I've only had Turkish food maybe one other time before that but if it's always this good I'm going to be seeking it out more often.

An added bonus, they have a belly dancer!  If you are interested in going you can check out their home page.  I recommend it.