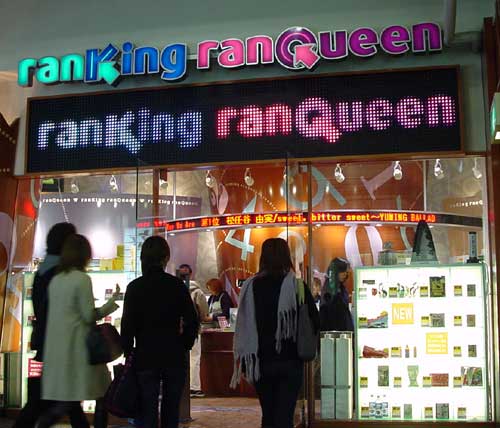 One day I was walking through Shibuya station and I noticed this new store.  "ranKing ranQueen"

Maybe every culture likes rankings.  In America we have the top 40 songs every Sunday and KROQ has the "hot 8 at 8" at 8pm every night and stuff like that.  A&E even started a series about top 10 everything.  Top 10 most dangerous jobs.  Top 10 best toys of all time.  Growing up in America I liked those programs but mostly because I was hoping my favorite song would hit the top or just curious what is the most dangerous job (according to A&E it's crab fishing in the North Atlantic)

Well, this store, ranKing ranQueen, takes it to an extreme.  They rank anything and everything.  Where they get all their info I'm not sure but that doesn't matter since the point for them is to get you to buy it because in doing so you'll be just like everybody else.

Seriously I would guess they have over 300 little rankings.  The number 1 keychain character, The number 1 fingernail polish, #1 stationary kit, #1 headache medicine.

There's act ually a TV program I enjoy watching called Ranking Kingdom.  It's a little more in the American vain of "what's selling" and less "what should I buy to fit in".  They also show the top ten comics, top ten video rentals, top ten selling video games but they also always have at least 3 random rankings.  They interview women in Shibuya and ask things like "What's your favorite type of sushi?" or "How many pairs of shoes do you own?" or "Which fat celebrity would you date?".  It's on Saturday night at 1:30am.  Last Saturday one of the random questions was "Which celebrity would look best in a swimming suit?"  #1 was Noriko Fujiwara.  She's the spokesperson for J.A.L. and FujiFilm's Digital Cameras and J-Phone and several other brands.