Other people might call this a Japanese pancake. Either way it's round and as most people cut it into pie like slices and since it's more like a pizza in the ingredients department I think pizza is a better description.

Okonomiyaki is usually made from flour, water, eggs and cabbage. The cabbage is chopped and mixed with the eggs, water and flour. To this is added pretty much anything you want. Common things to add would be thinly sliced chopped pork, thinly sliced chopped beef, chopped onions, octopus, squid, mushrooms. Note, like pizza you'd usually pick one or two things to add. You mix it together to make a batter and then you pour it on a grill and let it cook like a pancake. When one side is done you flip it over and cook the other side. When it's finished you turn off the heat or put it on a plate then you put okonomiyaki sauce on top and usually katsuobushi (dried bonito flakes) and mayonnaise. The katsuobushi is so thin that it waves in the heat coming off the freshly cooked okonomiyaki and so it looks like the top of your meal is crawling.

Here's an actual recipe although it seems to be missing the katsuobushi. Here are some more pictures from a Japanese site.

At many okonomiyaki restaurants the grill is at your table and you make it yourself. They just bring you a bowl with the ingredients. 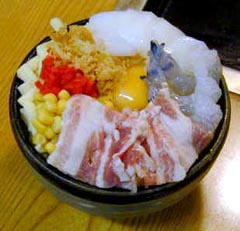 You can see the this bowl has corn and bacon in it. Making it yourself allows you to put as much of the extras as you like. The extras being sauce, katsuobushi and mayo. Of course it also means you might over or under cook it and do undercooked the batter might still be wet and overcooked it could be to dry or burnt. 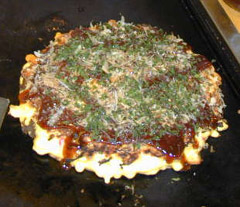 Here is a pretty standard finished okonomiyaki. Yummy!!!! The sauce is kind of similar to a teriyaki sauce being that it's a little sweet.I can't really imagine anybody not liking at least a beef or pork okonomiyaki maybe leaving the katsuobushi off if that scares you. 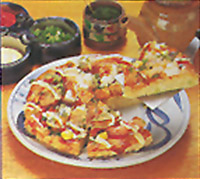 After it's finished it's usually cut it up like this which I think is why most English speaking people would call it Japanese pizza. 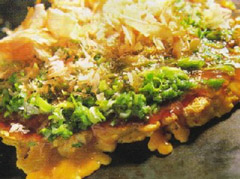 As I mentioned there you can put pretty much anything you want in Okonomiyaki. In fact I believe that Okonomi means "as you like" and I know that "yaki" means to cook on a grill or BBQ. The one above looks like it might be Negi Okonomiyaki. Negi means green onions.

Just having been flipped, this one has small red fish eggs in it which probably burst as it cooks and end up coloring the batter redish. 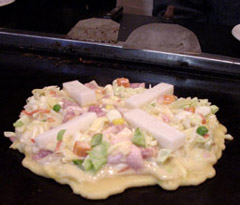 Mochi sticks have been added to this one that has just started cooking. Mochi is made from rice and is often used almost like a cheese in some dishes. Here it will end up melting and have the texture of mozzarella cheese but of course a much lighter flavor. You can buy mochi in slices that look like white american cheese.

I don't know any good places to get Okonomiyaki in the states. If you know of one please tell me. There is one place in Hawaii at the Royal Hawaiian Shopping Center called Chibo and is part of a chain that exists in Japan. In the LA/OC area I've only heard of about 3 restaurants that serve it and all of them really stink. 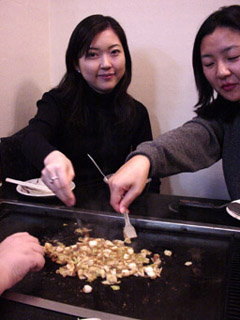 I would describe it as follows. Take cabbage and chop it very finely. Add some chopped meat or shellfish, some water and some spices. Mix it up, pour it on the grill and let it almost burn. Scrape the burnt parts out with a mini spatula and then eat those parts off the spatula. Repeat the scrape and eat parts until it's all gone. I'm not really sure what the ingredients are and I have to say that the first time I had it, seeing it sit there on the grill it looked like somebody hurrled. Of course lots of things look like that before they are cooked but this one looks like that even while you are eating it.

It's not bad at all. Imagine making a soup or a stew and scraping the residue from cooking it in a pot off the pot and eating it. Or if you cooked a casserole or a lasagna and scraped the overcooked edges of the pan. It would be concentrated and probably pretty good.