You've probably heard that Japan is famous for it's gadgets from a zillion models of cell phones to LCD computers outselling computers with monitors to everybody carrying a Japanese dictionary.

What you may not know is that for the most part the design and style of each is also very important to the Japanese.  Especially for music items like CD Walkmans, MD players and home stereos.  Some people buy a new portable MD player every year just to "keep up with fashion".  With that in mind, here are a few examples

These are some of the various portable MD players.  The latest MD players here in Japan support a new standard called MDLP.  MDLP uses the same old $2 a piece MD discs but puts 5 hours and 20 minutes on one disc!!!  MP3 can eat my shorts.  That's not to say I think MP3 is bad but currently MP3 is very expensive.  An MP3 player will generally come with a 64meg card which at most you can put maybe 2 hours on it and it won't sound all that great.  Mostly like a radio.  So far I can't hear any sound problems with on my MDLPs on top if which the batteries on my MD player will go for 66 hours!!!  If you get a playback only unit they have 100 hour models too.  MP3 players only seem to go like 10 hours max.  For the price of one 64meg card for an MP3 player I could get 60 MDs and put 320 hours of music on them.  Going the MP3 route I'd get 4 hours of music.

the colors of one Sony MD player

Almost all models from each manufacture come in a variety of colors.  Here's the colors for one model of Sony's 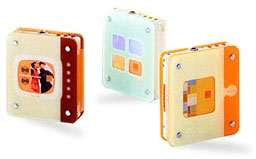 Panasonic makes in interesting line in that they look like little plastic books.  The MD player is sandwiched between two pieces of plastic with clear windows so you can slide different pictures behind the windows. 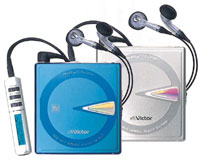 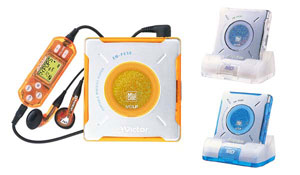 some of Victor's MD players

Here are some from Victor.  One of the new features that's come out recently is the cradle style recharger kind of like a cell phone.  You just set the MD player in the cradle and it starts recharging.  The older models you have to stick a plug somewhere in the MD player.  Not quite as cool and not as pretty to sit somewhere in your apartment.

You might also be able to see above that these MD players all have a controller on the cable that leads to the headphones.  Some of them get pretty fancy with little animations of swimming fish on the display for example.  MDs support naming the music tracks and those names show up on the MD player and/or the controller.  This gets pretty important for MDLPs since you might have 100 songs on one CD.

Next on the list are home stereos or COMPOs as the Japanese call them.  They come in so many more cool designs than their American counter parts.  I guess in America they figure people just aren't as interested in design though I seriously find that hard to believe.  Look at the success of the iMac.  I feel like if they did sell all these models they would do well.  The problem might be that the big electronics stores like Good Guys or Best Buy are not willing to carry so many models.  To them they would rather carry just one model and get everybody to buy it.  Then they don't have to worry about over stocking.  I wonder how the Japanese companies handle that issue

Exactly the same stereo as above.  (read below)

One of the newest features to come out is changing colors.  The 3 compos above are actually the exact same stereo.  Not 3 stereos in different colors.  They are the SAME STEREO.  Using the controls you can set the color of the lights to one of 32 different colors.  As there are lights in the speakers too this allows you to set the colors to whatever you prefer including random if you want.  Maybe this solves some of the stocking issues. 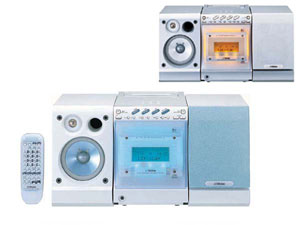 This model from Victor I think works similar.  I'm not sure it has 32 different light settings but it has at least 8.  Also all of the compos on this page are both MD and CD players.  MD is very popular in Japan.  As so many people take the train everyday they want the smallest thing they can carry and MD players are much smaller than CD players.  The middle part of this stereo slides down about 2 inches to reveal the place you put the CD in or 2 inches up to reveal the place you put MDs in.

Getting back to the old style these ones come in many colors but you've got to purchase them in the color you want when you buy it.  No magic changing lights.  Sometimes you can by the color facade separately if you want to change the color after you bought it. 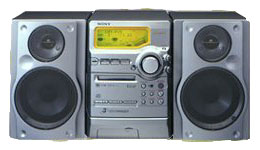 This is the compo I ended up getting.  It's got an MDLP player/recorder and 3 CD changer.  I got the white one.  I comes in white, silver and a special black limited model.  One of the reasons I got it is that I was also able to get a special computer interface for it.  This allows me to control the entire unit, all functions, from my PC.  The real reason I got the PC interface is so I could enter the track names on my MDs.  It's really a pain in the butt to put them in one letter at a time on the stereo so this way I can type them on the computer.  Interestingly the interface allows the computer to output its sounds to the stereo digitally over the USB cable. 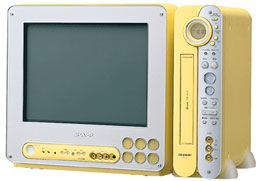 designer VCRs from Sharp and Victor/JVC

VCRs have just started to get the designer treatment.  Most of them are the old basically styleless design but just recently a few designer models have come out.  The yellow Sharp model above can sit upright or flat like a regular VCR and there are matching TVs.  They come in 3 colors.  I should have gotten one.  Victor followed suit but clearly their design is not as cool. 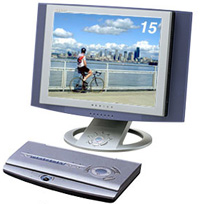 Even computers are starting to get the treatment although you could probably credit Apple for that.  Now of course Apple being Apple is trying to claim that any computer that's not ugly belongs to them but anyway.  The Sharp above acts like a TV.  The thing in front is a remote to switch channels etc but it pops open revealing a full keyboard and a trackball (think notebook keyboard) and in that case it's a regular PC. 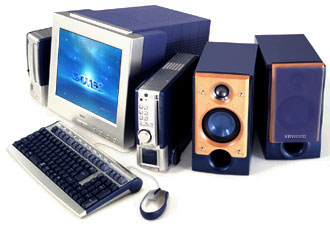 I don't know where Sotec came from but they've been coming on very strong in the Japanese PC market with interesting designs, great prices and lots of features.  This particular model above perfectly matches a particular Kenwood stereo that you can get in the U.S. (and Japan of course).  So they are billing it as not only your PC but your entertainment center with nice speakers etc.  It's got firewire/iLink/1384 built in too for video editing. 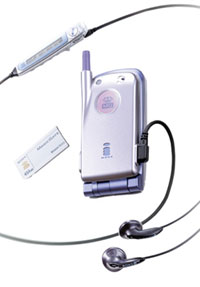 one of the first MP3 cell phones

While we're on gadgets here's a few more.  In December 2000 3 MP3 cell phones hit the market in Japan.  They are all around $300 to $400 and comparing them with the MDLP players above they arguable don't cut the mustard but they have the advantage that your cell phone is probably more important than your music machine and if you only wanted to carry one machine then this might be an advantage.  I haven't checked into the batteries.  I'd be worried that if I listened to music I'd run the batteries down and not be able to use the cell phone.  Maybe they should put separate batteries in it.  One for each function.  These are the first models though so I'm sure it will all get better and eventually be better than MDLP.  One move in that direction.  One company has digital music sent directly to your cellphone.  That would give you more music to choose from.

These came out in January 2001.  They are Net TVs.  They work on the same system as the cell phones but instead they have a network modem built in.  The advantage over a regular portable TV is that over the Net, theoretically, you could eventually watch every TV station in the world.  For now though they offer around 50 channels.  It's not quite there yet.  They run at like 8 frames a second or less and the screen is pretty small.  They also have a camera function.  You can see the camera just above the TV. 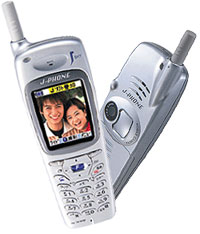 I should probably make a separate page to show lots of cell phones.  It's embarrassing how much better the Japanese cell phones are than the American ones.  This is the one I got.  It has a camera built in.  It's mostly a gimmick but it is fun.  You can e−mail the images, browse the web as long as the pages don't use more than 6K and don't use certain tags.  It's also got a 16 voice music synth for it's ringer.  You can program your own music or download the latest hits from the web.

There's now a flash for some of the cell phones with cameras.  Here's a picture of one.

I noticed this model of compo from Sony the other day taking *designer* gadgets even farther.

First you start with 1 of 3 basic models which all have basically the same features.  One is black, one white and one silver. 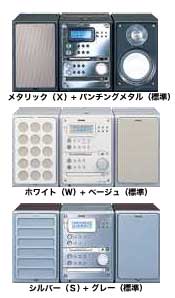 Then you pick a panel color.  I think there are more colors than just the 5 below.

This allows you to put them together in various combinations. 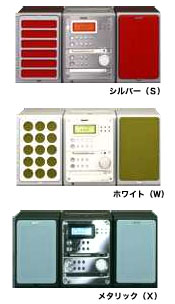 The Sony page is here.

Tags: japanfeature
Comments
Adcritic not holding up
Pictures from Cell!