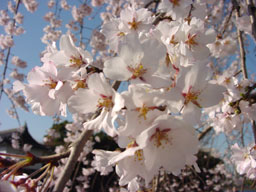 The first time I came to Japan in 1996 cherry blossom season had just ended. Generally around the beginning to middle of April Japan's cherry trees (or Sakura) blossom like popcorn suddenly appearing throughout a tree. One day the tree is a barren winter tree. The next day it's full of white or pink sakura blossoms. 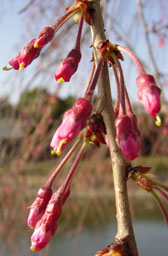 There's no way of really knowing exactly when it will happen which makes planning to visit Japan to see them somewhat of a problem. Depending on the weather that year it could happen as early as mid March or as late as mid April. Once they bloom they only last about a week. After 2 weeks all of the trees have finished and it's over.

I had no idea how beautiful and amazing a site it really is. This year (2001) my winter semester ended on March 27th. On March 28th I went to Otemachi (near Tokyo) to get my visa changed to a student visa. The government office was too busy but it's very near the moat around the Imperial Palace in Tokyo and around the moat are Sakura trees. Just 3 of them had bloomed that day.

Every year the Japanese plan to Hanami (go to a park, picnic and view the Sakura blossoms. hana = flower, mi = look). Depending on where you go and who you go with it can be a pretty crazy time. Many parties just bring an ton of alcohol and drink themselves loud and silly until late at night. In fact I was warned by several Japanese friends about old loud men in parks for Hanami. 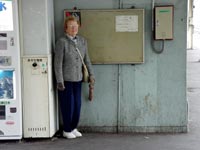 My classmates had decided to hanami the following Sunday as it was forecast to be the best day for it. Our teacher recommended a park by her place in Yoga on the Den−en−toshi line a few stops from Shibuya. I really had no idea what to expect.

Even worse, the day before it SNOWED. It was nearly freezing outside and snowflakes were hitting our taxi's windshield. That's not normal for late March in Tokyo. So, I was kind of worried that we were all going to go to this park and there was going to be nothing to see. 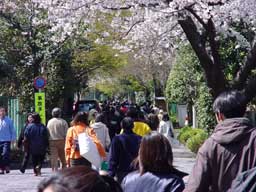 After waiting almost 30 minutes for a few late people we took off for the park. It was about a 10 or 15 minute walk from the station. It was relatively easy to find. Just follow all the other people out for Hanami.

We got to the park, which is a relatively big park, and from where we entered it looked like we were going to be disappointed. Very few trees near the entrance were blooming. The park is separated into 2 parts though. The front part is where pets are allowed. The rear part they are not. It took us a while to reach the rear as there were so many people trying to get in and there was a snack bar and a few food stands setup that were of course causing a little bit of slow down. 😉 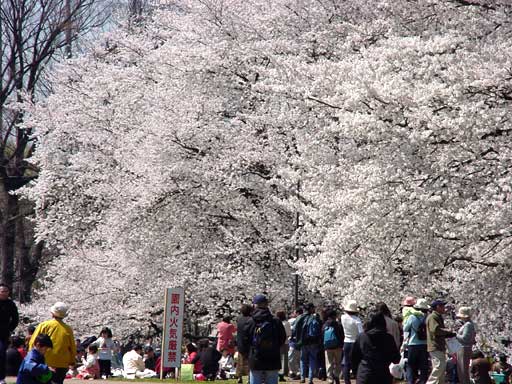 When we got to the rear part I was blown away. I was in no way expecting GIANT TREES COVERED WITH POPCORN. I don't know how else to describe it. It's amazing. The giant trees were entirely covered with large white clumps of flowers. No green. Just very dark almost black branches and nearly pure white blossoms. So many that you can almost not see the trees. 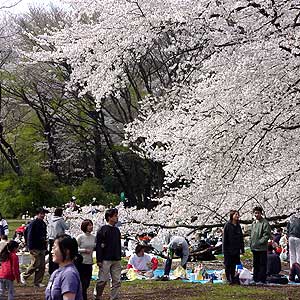 What can you say. I just stood and gapped in awe at all the white. It's kind of like just after the first big snow when everything is white except in this case you aren't freezing.

My friend Atsuko said "Sakura are part of the Japanese soul.&quot. I can see why. This is clearly a special time for Japan. I think it would be in any country with an event like this.

For many things this event marks the beginning and or end of lots of stuff in Japan. It's the time when most companies do their major hiring. It's the time when students graduate. You can see many girls walking around in kimono and riding trains which I guess is something that is often worn to one's graduation. I didn't see any men wearing anything special though. Their loss I think. 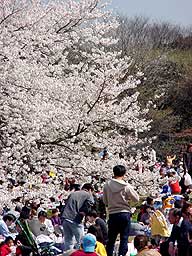 It's the time when one year of school is over and you advance to the next. The classes at Digital Hollywood were ending and new ones starting.

It's also the time new people take office in government and when the government makes it's new yearly budget. The down side to that is that the month before the different departments are scrabbling to spend last years budget so it won't get lowered this year and so they start ripping the streets up for seemingly random reasons.

I don't know if the entire country goes Hanami but sometimes it seems that way. I've seen parks where nearly every square inch of grass is covered with plastic mats and people and getting to your mat is an exercise in trying not to step on people. 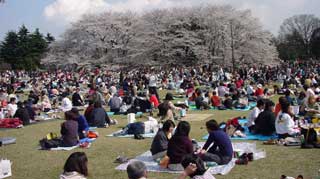 Speaking of which originally we were just going to show up at the park on Sunday with basically no pre−planning but my teacher and I were a little worried. People come early in the morning, like 6am and nail down a plastic mat and write in big letters their party's name like "KAI Nihongo School!&quot. It's not common but also not that uncommon for fights to break out over who has what space. Fortunately our teacher lives close to the park so she was able to stake a claim for us.

As you can see above it was pretty crowded though actually it was not as crowed as I expected. I think this park might be a lesser known park then say Ueno park which is fairly famous in Tokyo.

Here you can see the line for the women's restroom. I least *I* thought it was interesting. I have no idea how long it would take to get to the front of the line. I wonder what you do if you have an emergency. Maybe you have to rap for it. (If you don't get that you should go and play Parrapa the rapper till you get to the fifth level where you have exactly that situation 😃

One other problem with crowds is garbage. One of the ways they deal with that is they have large trashrooms. Not just trashcans but trashrooms.. I didn't stay to see the park after everybody left but my impression was that it was going to end up relatively clean. Especially compared to say the mall park in Washington DC after the 4th of July which was a complete dump when I was there on a July 5th in 1987 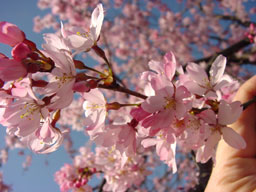 There are at least 2 kinds of sakura. Someiyoshino which are the white ones and Shidarezakura the light pink ones. The park had a little of both but most of the Shidarezakura were not blooming yet. I did see a few a few days earlier when I saw my first blossoms.

There are also some super pink trees. I'm not sure if they are sakura or not but the are pretty. We saw a few here and there about Tokyo and Kyoto. In fact at first there was an ad in some of the train stations for a river area in Tokyo where there are lots of pink blossoms and at that time my mom and Grandma had not seen anything but the white blossoms and so they thought the ad or poster must have been touched up in something like Photoshop. Well, I'm not going to say it wasn't but after seeing the real thing it was easy to believe that the photo in the poster was real. 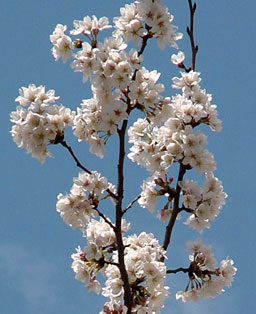 During this time there are also special foods. It seemed like a staple of Japanese sweets but you find Anko in nearly everything. Anko is a sweet paste made from beans. It's got a similar consistancy to Mexican refried beans except Anko is a little more gritty, a little less powdery and it's darker. There are at least 2 kinds. With beans still in the mush and without (all mush). Kind of like orange juice. You can have it with or without pulp.

Anko is put in all kinds of things. Inside bread kind of like a jelly donut except Anko not jelly. This is called Anpan and there's even a famous Japanese character called Anpaman who's head is an Anpan.

There's also deep fried anpan converted in sugar. It looks like a cross between a sugar donut and a old fashion donut but in the shape of a jelly donut as it's got anko inside. Also anko between to small pancakes is called Imagawayaki or Doreyaki and is Doraemon's favorite food. 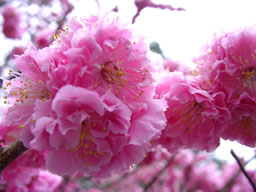 Anyway, probably the most common Sakura blossom season food is made from mochi (which is rice pounded into a dough). They add pink sakura petals to the rice as it's being pounded so it comes out pink instead of white. Then you take some, roll it into a tortilla shape, put some anko in the middle and roll it up and then around that roll a cherry tree leaf. I'm not sure where the leaves come from as there are none on the cherry trees. Our teacher brought most of the food which she claimed she made all herself including these pastries. That sure was nice of her. 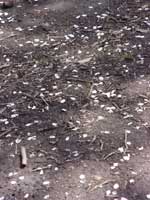 Even fallen petals are beautiful. Once the trees bloom, almost immediately the petals start to fall. I've been told on later days it can look like it's snowing. Some people take a more cynical view, I heard them say they look like used tissue paper sitting on the ground. I'm of the "it's beautiful" camp. Especially watching them flutter down from the trees as they fall. 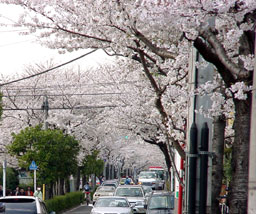 One thing that surprised my Mother and Grandmother was that Sakura trees are everywhere. I guess they thought it was pretty much limited to a few parks or special areas and then maybe some farms but walking around even a big city like Tokyo you see Sakura everywhere. Of course unless you recognize sakura trees when they are not blooming you'd have no idea there were so many.

If you read my article about finding an apartment in Tokyo then you might remember that last November I had originally picked an apartment with a great view between Iidabashi and Ichigaya stations. 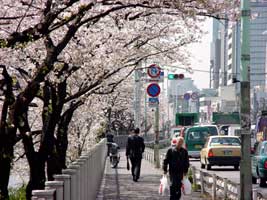 Here you can see the area in front of my old apartment. Yes, it is very beautiful. It would have been very nice to see such a site every morning for a week or too. Too bad it was so loud over there.

We also went to Kyoto the next day by Shinkansen (bullet train) which is supposed to be famous for its beautiful sakura trees and we did see quite a few there too including some lit up at night. Extremely cool.

If you ever get the chance Hanami is definitely something you should experience. 😊