Gyuudon in America: A little bit of heaven

If it's not clear from the title I LOVE GYUUDON. Gyuudon (牛丼), where "gyuu" rhymes with "zoo" and "don" rhymes with "zone", is a beef bowl. Specifically beef over rice. The most famous brand is Yoshinoya which is originally from Japan but found all over the world.

I haven't tried Yoshinoya in Taiwan or Singapore where I've also seen it but I have tried it in America and only God knows why but THEY EFFED IT UP! Why they thought they needed to change perfection into utter crap I have no idea but American Yoshinoya is this GROSS goopy glop with this thick flavorless gloopy clearish sauce, thick chunks of beef and veggies like broccoli, carrots and peas. THAT IS NOT GYUUDON!!!! WTF Yoshinoya!!

I had pretty much given up on beef bowl in the states. Then, on Monday, I was at the local Japanese market, Nijiya, and happened to look in the freezer section, something I rarely do and I saw this. 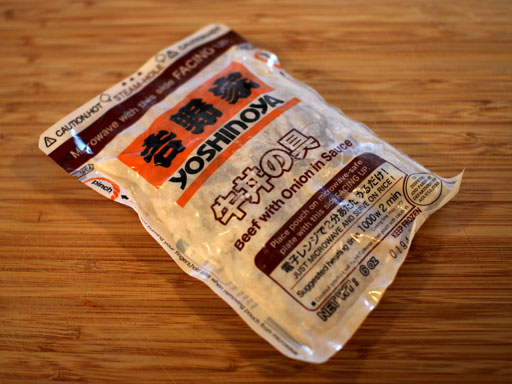 I didn't have high hopes that a frozen package of beef would come close to the original delicious dish. Worse, I picked it up and it said distributed by Yoshinoya America, the same company that has screwed up the restaurants in America. Still, it wasn't expensive so I bought a couple even though I expected to open it up and find chunky goopy gross beef instead of thin light yummy flavorful beef.

I took it home and immediately started fixing it up. I put a cup of rice in my rice cooker, pushed the button and impatiently waited the 50 minutes until the rice was ready checking every 10 minutes to see if it was done. Ding!!! It's done. I nuke the beef and surprise surprise ... it was great! Super thinly sliced, light onion based sauce. I put an egg on it, didn't have any beni shoga 紅生姜 (red ginger) so I used a different pickled thing I thought would be a good substitute. I took a bite and ... IT WAS PERFECT!!! Exactly how I remember it in Japan. Only thing missing is a bar and a stool and a employee in a Yoshinoya outfit to order from. I now have a source of Gyuudon in America! YES!

If you want to try it here's what you need. 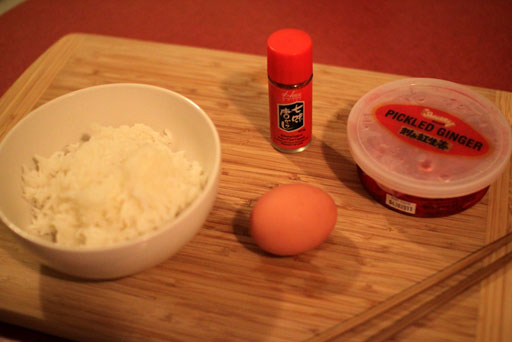 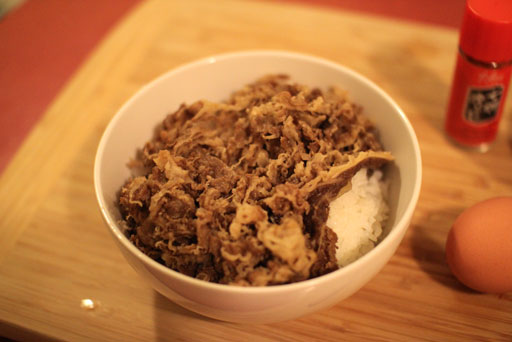 First, make the rice. When the rice is done, leave it in the pot as you want it hot! Now nuke the beef package. As soon as the beef is done put some rice in your bowl then poor the beef packet on top. Make a small depression in the center, crack open the raw egg and set it in the depression. Add some beni shoga. 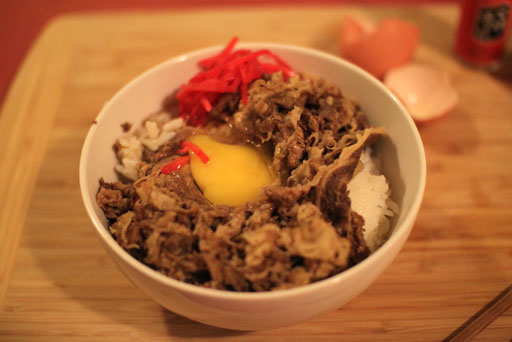 Now mix it all up with your chopsticks. The egg may slightly cook from the heat of the rice and beef although it will mostly stay juicy. Mix it up good. When you're done if you want to add a little spice add the shichimi togarashi. 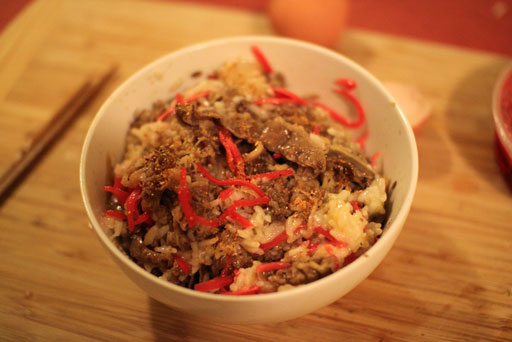 PS: I have no idea how safe raw eggs are. They serve them commonly in Japan. In the states I know lots of people that are body building used to eat raw eggs. Personally I'm willing to take the chance because it's the way I like it. Without the egg it's not real to me. My voodoo is that I live a 1 minute walk from Whole Foods where I can buy organic free range eggs. Hopefully that makes them more safe. 😛 According to this study, one in 30000 eggs is bad. I don't know about you but I eat like 2−3 eggs a week max. That means even if I live to 100 I'm only going to eat 15000 eggs in my life. And, even if an egg was bad, there's only a 1 in 200 chance of getting seriously sick. 1 in 30000 times 1 in 200 that's one in 6 million chance. I'm far more likely to die in car accident than get seriously sick from a raw egg. But anyway, I'm not telling you to eat raw eggs. That's your choice. Do so at your own risk.