I was looking through a guide of late night places in Tokyo and Chinese Cafe Eight was on the list. I had wanted to check it out just a couple of weeks before I read it was open 24 hours when I passed by it with some friends so I finally went and checked it out. 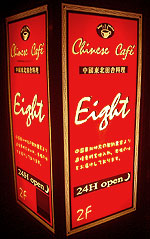 Well, I can thankfully report that Chinese Cafe Eight is real Chinese. Of course at first that was just my opinion from comparing it to the good Chinese restaurants I miss from Los Angeles so in other words I wasn't 100% sure it was real but it was what I liked. But then, I met a lady from Hong Kong who has been living in Japan for 6 years and she said she had completely given up on Chinese food in Japan and just stopped even trying to find anything good. I told her about this place that I thought was good although I explained I only had LA Chinese food to compare to. Well, she decided to take and chance and thankfully she confirmed what I'm telling you. It's real Chinese. She was very happy 😊 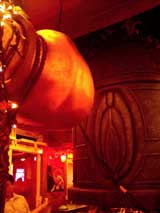 Even more than that, for Tokyo it's super cheap. One other problem with most Tokyo Chinese restaurants is they are so expensive that you can't eat a real Chinese meal where you order lots of different things and have a little of each. Not so here. They have a giant menu and reasonable prices. For example one of the first things on their menu is sui−gyoza (sorry, I don't know the Chinese word for gyoza 餃子). They have 26 different kinds and they are 3 to a plate, one plate is 100yen! Yea, you heard that right. 1 plate 100 yen. Any other place in Tokyo would likely be 1 plate 400−600 yen.

There are probably a few other things I could tell you about but it's best you find those out on your own.😉