Here are some examples of what is pushed.

This phone's unique feature is that it has a light at the top that displays in different colors which you can choose to match your mood, clothes, whatever.

These phones have a color LCD panel on the OUTSIDE which you can set to pretty much anything you want.

Like a photo of your girlfriend or since the phones also run Java programs you can download various animated clocks in different styles.

My phone has a back display but it is not color.

They don't really do it for me but some people dig-em.

Sony-Ericsson recently came out with this phone.

It's a basic phone with no super fancy features.  No Java, no Camera, no GPS though of course it does do Web, E-Mail, Voice mail and multi-voice rings which are pretty much considered must haves.  But, it's only about $40 and it comes in 3 basic colors and has all these snap on backs to match your mood/style.

Then you can by more backs later like these

Sony also has the thumbwheel control which they patented so no one else can use it.  It does make some things alot faster, scrolling through your list of phone numbers for example.

Another issue is that for nearly all functions the phones have pictures or animations.  A picture or anim when you turn the phone on, or off.  When it's idle, When you dial, when a call is coming in, when you send an e-mail, when you receive an e-mail etc.  On many phones you can set those yourself if you are up to it.  Find out the required format, make yourself a JPG or PNG file of the right size, e-mail it to yourself then select the correct options to set it to one of those pictures.

Some companies even push what characters they have licensed and built into the phone.  The Sony-Ericsson above has the new AIBO dog as it's character.  The new Nec N211 series have Disney characters and a Disney based Java game.

Some other examples of backgrounds.

My phone is even more silly.  On top of being able to set a background (as well as the images for all the other events) I can choose from 4 styles of clocks.  3 digital ones and 1 analog and for the digital ones I can choose like 9 positions for them (top, left, bottom, etc...)

More silly than that, the phone has a graphical menu.  That's not uncommon.  What's crazy is that you can set the style of that menu and download more styles.

One feature that is arguably not about fashion but that is something they advertise is the number of characters you can display on the screen.  My phone has 3 font sizes.

Here's the smallest font one with an English message on it 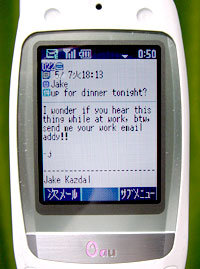 As you can see that's quite alot more than your average 3 to 5 line American phone.  Plenty for easily reading and writing e-mail.  On the other side, some phones have extremely large fonts for people with bad eyesight.  My phone doesn't have super large fonts but it will display the phone list in double size.

Of course currently the companies are heavily pushing the built in cameras including the ability to shoot and e-mail short movies and the GPS abilities of some phones but some of the other things they push are for example:

Some phones have quick access buttons on the side.  My last phone has a button for recording voice memos using the side buttons.

Some phones have better input systems including ATOK, a kind of famous Japanese input system.  Most of the phones have user definable shortcuts so you can select pre-entered phrases like "Happy Birthday!" or "What's up for Today?" etc.  Japanese uses Kanji and the way you enter Japanese is to enter then roman characters (A,B,C...) that sound like the world you are trying to enter in Japanese, then usually pressing down to go through a list of possible kanji that matches what you entered.  My last phone promoted the fact that they had added some special words.  Like if you entered WA-I which in Japanese would be short for WA-I WA-I (why why) which is what you say when you are excited like when someone hands you an unexpected present.  Well, if you entered WA-I and pressed down for the Kanji it would come up with (^O^) which is supposed to be a picture of a person going WA-I WA-I (thing WOW! WOW!).  They had about 20 of them added to their dictionary.

Another thing is that most Japanese phones when you have a phone book it's more like Microsoft Outlook.  Not just a list of one name, one phone number but you can have one name many phone numbers, many e-mail address, each one with an associated icon so it's easy to tell which is their home phone or work e-mail or cell phone e-mail.  Also space for addresses, notes, birthdays, blood type (used like astrology sign).  Other phones have the ability to make a face from parts to assign to each person.  My phone, since it has the camera, has the ability to assign a picture to each person's profile.