Good and not good noodles.

The first time I went to this place I thought it was great but I think there is a story behind that.

The first time I went to this place was on New Year's Day.  New Year's Day in Japan is like Christmas in America.  Nothing is open, People are with their families etc. 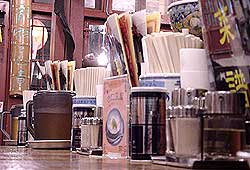 For a gaijin (foreigner) in Tokyo it can be pretty lonely.  Especially with most of your luckier gaijin friends home for the holidays.

So, I found myself in Tokyo with my friend Eric.  Also nothing is open so we went to Shibuya to eat something and then thought about wandering around a little before we settled on something.

At first we were going to go to Tsukumo ramen and walk from Shibuya to Ebisu just to waste time.  My thinking was since many ramen places are open very late into the early morning that maybe they would be open.  As we were walking over we saw this place was open 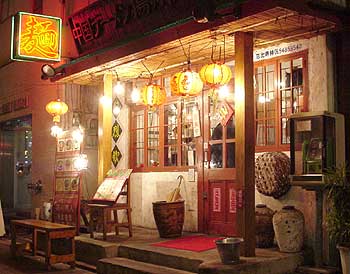 We kept walking all the way to Tsukamo ramen only to find it was closed so we walked back here.  It's supposedly Chinese noodles.  Their menu has about 10−12 kinds of ramen although almost all of them are ?? sappari ??.  If I have the word correct what I mean to say is that the soup the noodles are in is generally a clear broth.  If it were western soup, chicken broth would be sappari.  Where as French Onion Soup would not. 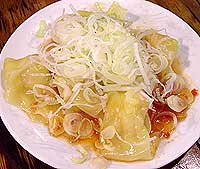 Generally I prefer thicker or most flavorful soup but that day I was pretty happy with a thinner more watery soup.  Probably because I was so glad to find a place open and probably because it was actually fairly busy.

I had the crab and egg omolette ramen. Take an egg, mix in some crab meat, cook like an omolette, place on top the noodle in the soup, serve.

We also had some shrimp gyoza which they they were pushing with little signs on each table and we had a chashuu−man (bbq pork bun) which was not bad but not great. 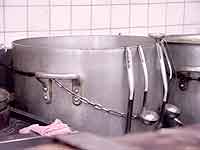 Finally we had annindofu which was heavely.  I'd go back just for that 😊

The funny thing about annindofu.  It seems like everybody has a different idea of what is really is.  I've seen people call it Almond Jello or Almond Puddng but as far as I know there are no Almonds in it.  I've seen people call it Coconut Custard but again, I don't think there are any Coconuts in it either.  Finally a Taiwanese friend told me it is made from ground apricot seeds and she pointed out the first kanji in annindofu is the kanji for apricot.  It would be nice to know which person is correct.

Regardless, I only have this place a 2.5.  I loved it the first time I went but I think like I said it was really the circumstances under which I went because I went back about a month later and was disappointed in just about everything except the annindofu.

So, if you like sappari style soups then maybe you should check it out but for me I'll probably stick to some of my other favorite noodle places.