If you are coming to Tokyo or if you are newly living in Tokyo here's a few tips for dealing with the trains and subway in here.

JR being the biggest is the one most people just coming to Tokyo read about. If you buy a Japan Rail Pass your are buying just that a JR Pass which is only useful on JR trains, not any of those other train companies. That doesn't mean you shouldn't buy one but you should be aware what it's good for.

A JR Pass lets you ride JR trains including the Shinkansen (Bullet Train). If you are going to take the Shinkansen to a couple of other places like Kyoto or Osaka then yes, you should get a JR Pass. (at the time of this writing, Sept 2006, it's about $250 round trip to Kyoto from Tokyo) But, if you are going to spend most of your time in and around Tokyo a JR Pass isn't that useful because the majority if trains in Tokyo are not JR trains and you probably won't spend an enter pass worth of money. JR passes cost around $400.

Another confusing issue is that JR doesn't show any of the other trains on their maps. If you get a JR map or if you are on a JR train this is what you'll see

That small circular area near the center is actually full of trains from other companies. Here's a map with the some of the rest of the Tokyo train lines with the same circular area marked.

To give you an example of the problems this causes, when I first came to Japan I lived near Musashi−Shinjo (#1 on the map below)

Musashi−Shinjo is a JR only stop so I'd get on the train and look at the JR provided map not knowing that there were more trains. According to that map to get to Shibuya I needed to take the yellow line (Nambu line) to Kawasaki, switch to the blue or orange line (blue = Keihin Tohoku line) and then switch to the green line (Yamanote line). I did that for the first 6 months I was here. It took about 1 hour and 20 minutes.

If you are a tourist and you decide you are going to stay in and around the Tokyo area it's probably better to get a Suika card. 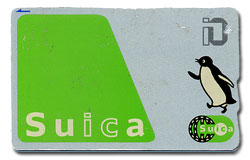 They cost 500yen (about $4.50) and you put money on them and then you can just walk through the gates, slap the card down and it will deduct the money. This will save you from having to buy a ticket at each station and from having to figure what price of ticket to buy. Most stations sell them in special ticket machines.

Both machines have an English button on the screen so just press it and follow the instructions. The machine on the left (blue) is for buying a new card. You put in 2000yen and you get 1 card and 1500yen credit on the card. The machine on the right is for added more money to your card. Put your card in and it will tell you how much is left on it and give you the option to add more.

The Suika cards are neat in that you don't put them in the ticket slot like regular tickets when you go in the gates. Instead you just touch them to the suika spot on the gate.

It would really rock if the Suica card worked everywhere. Unfortunately Suica is JR only and rumor has it that JR is an evil company and so none of the other train companies are willing to put up with their bad terms. So,....all the other trains companies use a different and older standard.

The other 10+ Tokyo train companies use a system called Passnet. Here's a typical passnet card. 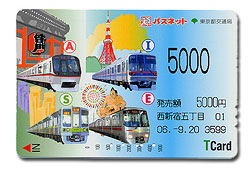 Passnet cards come in 1000, 3000 and 5000yen versions. While you use it the gate will print on the back of the card the name of the station you used it at and how much money is left on the card.

If your curious the first line says on the 29th I went from Aoyama (where I work) to Yurakucho where I had dinner with a friend. Then we went from Yurakucho to Shinkiba where I clubbed all night at Ageha, the largest club in Tokyo. On the 30th I went from Nakanoshimbashi where I live to Yotuya where I went to a join birthday party.

One nice thing about passnet cards is they come in many styles almost like postage stamps. People even collect them. Here's a few from Sept 2006.

The important part about Passnet cards is the Logo.

You can get them at any station on a line that excepts them. Just look for the symbol on the machine.

Having both a Suika card and a Passnet card and be quite a life saver. If you are running to catch the train you can just run to the gate and use your card. If you don't have one you'll have to run over and buy a ticket, try to figure out the price of the ticket to buy, fumble around for money and change and possibly miss your train.

Some other random trivia. Some Tokyo trains have many of the same names you'd expect for a trains in any large city they're just in Japanese. Examples.

Some other trains are named after the areas they connect

Japanese having multiple pronunciations per character some lines aren't as clear.

The Keiyo line (not to be confused with the Keio line). 京葉 = keiyou where 京 is from Tokyo (東京) and 葉 is from Chiba (千葉). In other words the Keiyo line is the Tokyo<−>Chiba line but because Japanese kanji have different pronunciations it's pronounced Keiyo. Another example is the Keihin Tohoku line