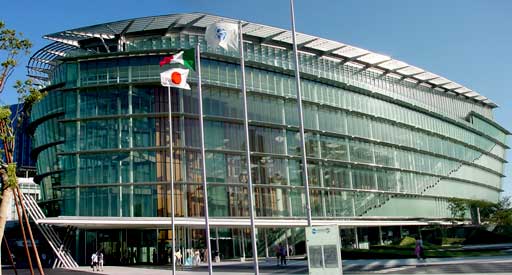 The Tokyo Miraikan, which I guess would be best translated as the Tokyo Museum of the Future, opened July 10th 2001.  It's spankin new and in Odiaba which is a small, I believe, man made island in Tokyo Bay where nearly all the buildings and structures are architectural wonders.

I knew I had to check it out and so I asked my friend Saiko to go with me.  It turned out to be cooler than I expected.  Here's some of the stuff we saw.

The first thing you'll most likely see is this light covered globe. 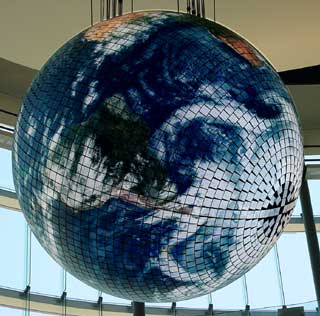 It's pretty darn impressive.  It's covered in some kind of display system.  I don't think it's LCD because it had too much contrast.  Here's another view of it 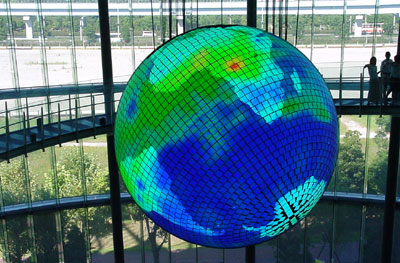 You can see the people in the background for a size comparison.  The whole thing is animated either showing an ANIMATED satellite projected image of the world or sometimes an heat mapped or other information mapped image also animated.  Pretty dang cool!

The first floor room seems to be mostly about the environment and recycling.  They have a cutaway Japanese style house with things like bottles of water under the floor to store heat and insulation in the walls for example.  Something that seems to be missing from most Japanese buildings.

There was also this electric limo 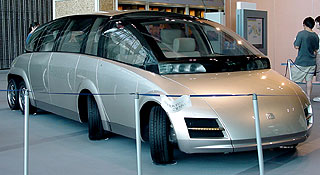 It claimed to go like 316kph. I should have got more details but I was too stunned by the globe.

They also had a section showing products designed for recycling.  The great example was those disposable cameras that are sold everywhere. 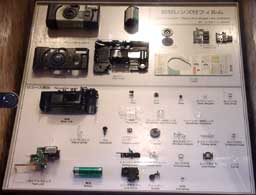 Here are all the parts and they had a video showing the disassembly machine disassembling them.  Every single part is re−used or recycled.  Next to that they had a picture of the old style which was what was still being used in the U.S. when I left.  The kind with the cardboard exterior.  These kind have a plastic exterior with a sticker on the plastic.  Those older kind only recycled like 60% of their materials.

Going to the second floor was were most of the "action" was. 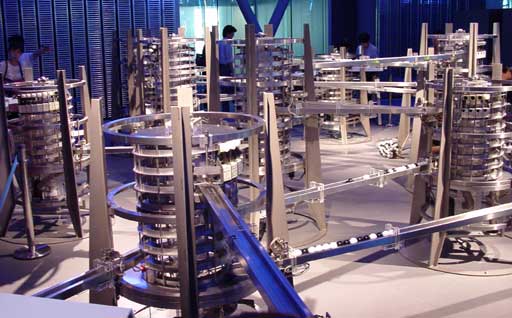 The coolest thing was this marble computer network simulator. What's that?  It's a big contraption that simulates a computer network.  First you go to one of 5 terminals like this 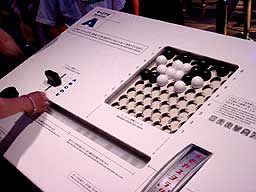 Unfortunately it was hard for people to understand.  Probably because they refused to read the instructions / explanation as usual but I got it down pretty quick.  You can send 8 bits at a time.  Each bit is represented as a marble.  black = 0, white = 1.  You can either send a single 8 bit character.  To do this you roll the dial in the bottom right corner to the character you want to send.  That will make the markers right half of the long horizontal slot change showing where to put white and where to but black marbles.  Then, on the left is a selector for which of 5 display terminals you want to send your message.  Moving the selector shows you which pattern of marbles you need to put in the left side of the slot to send to that particular display terminal.  You put in all the marbles and then press the SEND button and the marbles roll into the machine.  8 marbles for the address of the terminal followed by an 8 marble message.

The hardest part for people to get is that area where there is a grid of marbles, that is not really part of the machine.  It's just a place to compose your message if you want to send a 8x8 picture instead of a single character.  To do this you make your picture, then, one line at a time you put in 8 marbles for the address of the display terminal and one line of your picture (one line of 8 marbles)  To send the next line you have to put in the 8 address marbles again, following by the next line of 8 marbles.  Got it?  In other words, if you wanted to send this image.

and the address for terminal D was

The marbles enter the machine above and roll around through the system.  There are 4 network routers and 5 network *cards*.  Routers check only the first 4 marbles of the address.  Cards check all 8 address marbles.  If the marbles match then the next 16 marbles will be directed one way. If not they will be directed another way. 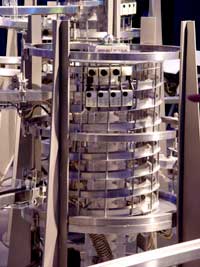 The marbles roll in and get routed either to the network card or to the next router.  You can see near the top of the router in the picture above are the sensors to read the marbles.  This router is looking for black black black white.  If those are the marbles it sees, it will send the next 16 marbles to the display. 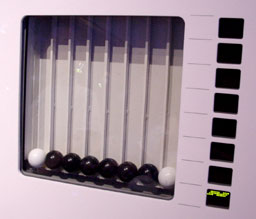 you can see this is the third line of the bottom of the heart picture above.  The problem with sending an 8x8 image is that the stupid employees didn't understand the machine either and so they would go over to a hub and start pulling out marbles to restock the terminals so there was no guarantee that your message would make it through.

If you look closely you can see that next to the line of marbles in the display, on the right is a green tilde mark. In those black squares the letters or symbols your marbles represent appear.  In this way, instead of sending a picture you can enter the codes for letters, numbers and symbols and they'll appear.

Here's a movie of the marbles being routed into the display.

Another cool thing on the floor was this enormous scanner. 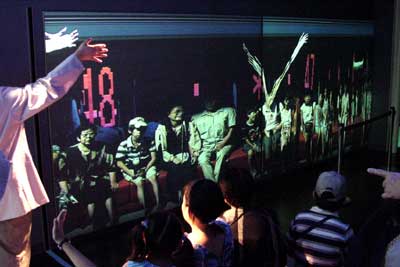 The way it worked is ... you may be able to see the slot in the wall near the left side of the picture above.  That slot scanned maybe 1 inch at a time.  In front of the that slot is a rotating seat that maybe 10 people can sit on.  You sit on the seat, hold still and you get scanned as you rotate by that slot.  The scanned people scroll down the 2 large displays.  Way cool!

Here's me and my friend Saiko after we were scanned 😉 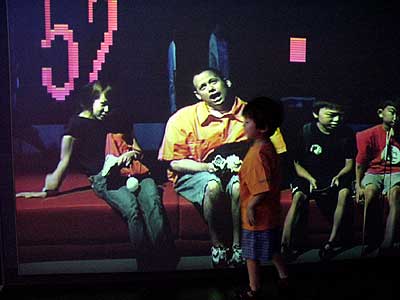 You can see the scanner in motion here.

There was this light tablet. 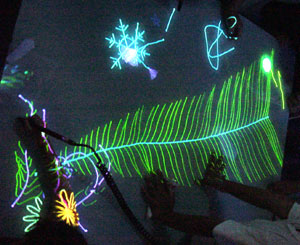 I don't really know what to call it.  It was a platform with a bunch of pens, like graphics tablet pens, and above it was a video projector projecting a computer image.  4 or 5 people could draw with different pens at the same time.  Each pen did something slightly different like for example somebody drew that long blue line in the center of the big leaf above and the computer added the leaves.  I think it may have decided what to turn your scribbles into based on what you scribbled.  On top of which it animated them.  Here's a movie of it in action.

Next to that was this fish floor room 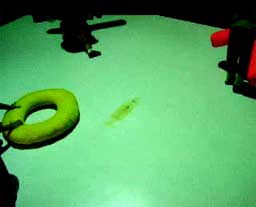 A 10x10 room maybe with a projection of a computer image covering the floor and fishes zooming around and they *bounced* off anything that wasn't white.  Check it out here.  The little kids seemed to love this.

There was a display of various input devices.  I was wondering if they had force feedback or not but the lines were a little long so I didn't stick around to check them out but the two most interesting were the horse strap controller and the coffee cup controller. 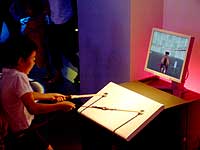 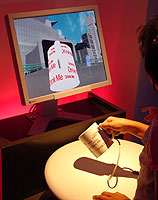 Here's the cup controller in action.

Other things at the Miraikan.  There where displays on nano−technology showing various technologies that are being developed.  One display showed the inside of a micro−processor in super detail.  This one showed this 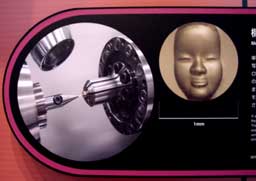 example.  That face is 1 mm tall.  Most of those exhibits had movies running explaining various things. 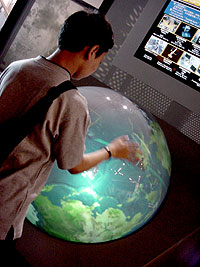 This display was mildly interesting.  It was a map of the world projected on the inside of a half−sphere of glass.  If you slid your hand over the surface the image inside would roll almost like you were rolling a big trackball.  Projected on the map were various images of satellites in their current position.  If you centered them under a box drawn on the sphere their info would appear on the display above. 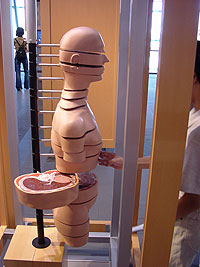 We were quite sure if this was a biological exhibit or a left over prop from the latest Hellraiser movie.😃

And finally there was real sliced human brain samples.  I wonder what they taste like.  I also wondered if the 4 one over in the 4 row in the bottom left part is part of your brain where you think about eating brain. 🤢 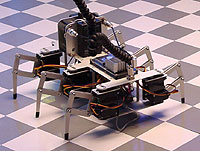 There were a few robot exhibits like the one above and also one about the walking robot that Honda made.  That one was just a video though.

Another thing I didn't get any good pictures of but that was kind of cool there was a section of super conductors with explanations of what it all means and various problems and solutions.  Also in that area was a movie of the various work on mag−lev trains.  I guess they've been working on them for a while according to all the video they showed.  In 1999 they had full sized mag−lev trains running with passengers at 557kph!!!!  That comes out to around 350 miles per hour!  Of course they are just experimental so far.  I'm not sure what plans they have if any to actually put them in to use.

Also in that area they had a working mag−lev train.  I'm not sure how it worked.  The track was kidney bean shaped and was maybe 30 feet long, 20 feet wide.  The train was about 6 feet long. It only moved at like 1 foot every 5 seconds but it was levitating about 1.5 cm above the track.  There was a scary warning not to bring your credit cards near the track.  That brings up a question I've had since I first saw mag−lev trains.  How do they prevent such strong magnetic waves from coming into the cabin and erasing everybody's credit cards and hard drives.  I'm sure there's some kind of shield they can put in but I'm just curious.

There was one exhibit which was pretty lame and behind the times.  It was a 20 person 3D chat game.  The problem was it ran at like 5 hz.  You'd stand in front of one of 20 LCD screens, pop on a headphone with mic and pick up the joypad and walk around a very simple couple of rooms with almost no details.  You were represented by a just a 2d silhouette.  If you got near somebody else you could supposedly talk to them but it never seemed to work.  The reason it's lame is that you could just play Quake or Half Life and have a far far better experience.  20 people would be no problem.  Even with my 350mhz machine you'd get 60 hz or better.  The only thing they added was the voice but that's supposed to be in Half life 2 if it's not already in something else.