The Importance of Printer Paper

About a year and a half ago I bought my first color printer. It was an Epson PM−770C which is I believe the Japanese model of the Epson 750. The Epson 750 is the "photo" model that uses 6 inks. 5 colors + black.

Like most people I saw the demos at the store and it looked great so I bought one.

After playing around with it a little the first thing I found out was that inkjet printers need special paper in order to look good. I promptly went back to the store I purchased the printer from and bought some paper. At the time Konica glossy photo paper caught my eye so I gave it a try. Probably in a 20 sheet pack. As I don't actually do much printing so that lasted me for about 9 months. My printouts looked great. I was very happy and amazed at how good inkjet technology had become.

Then, last year around September as we were finishing up Crash Team Racing somebody on the team wanted a music CD of the music in the game. The person in charge of the music burnt about 20 CDs and I took it upon myself to make covers and back−liners for the cases. About 2/3rd of the way through printing them I ran out of paper. It was then that I found out how different the various photo papers actually are. I went to the local Staples which is just down the street from my apartment. First I looked for Konica. That's what I was using so I figured why rock the boat. But, they didn't sell Konica paper. Thinking that another photo company would probably have an interest in making great paper I bought some Kodak photo paper. 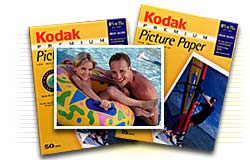 Boy was I disappointed. The ink seemed to glob up and the printouts didn't look so good anymore. I was very disappointed. I bought some IBM paper.

Better but still not as good as before.

I stuck with the HP paper but I still wanted to try to Konica paper again.

Finally this summer I decided to ask a friend in Japan to get me some but just before I pressed "send" on that e−mail I decided I should search the net and see if Konica paper was available here in the states. It was and I promptly ordered some.

I thought I'd share my results here on the net. I'm really hoping that some magazine like PC Magazine will start testing papers. It only took me a few minutes to stick six sheets of different paper in the printer and print a small test. Is it that some papers are better then others or is it a combination of certain ink with a certain paper? I don't know but the results were pretty dramatic.

I printed each test twice just to verify that the results were actually consistent and not a fluke of each print job. They are. Here are the results. Click on any image for the full print test.

The actual printouts are only 1 inch wide. What you see here are semi extreme closeups from my scanner. They are accurate representations of the printouts themselves but regardless they all look better at actual size then close up.

It would be a great service if some group like PC Magazine could test each printer with each type of paper available. I'd really like to know if there is a heavy weight photo paper that works well with this printer or any printer for that matter. It's kind of costly to test them out as photo paper is fairly expensive.

You'd think this would be a priority for the paper manufactures too. At least that ones that turn out best.