I'm guessing at the name since the real name is only written in Kanji and you can't tell how to pronounce Kanji in Japanese without asking.

I think most people in Tokyo know about this place in Odaiba at the Odaiba Little Hong Kong.  A mall inside a mall that's theme is Hong Kong and has about 10 Chinese restaurants.

Let me start off by saying although I probably don't know what *real* dim sum is.  I do feel like Tokyo doesn't have any.  In L.A. we have like 1 million Chinese immigrants or something like that.  You can drive for half an hour down Garfield Ave and see almost non stop Chinese signs.  So, in L.A. that also means we have quite a bit of good dim sum.

The Japanese call it Yamucha and so far every time I've had it it's not been as good as L.A's  Is that because it's just different or is it because it's been Japanified.  Kind of like Taco Bell or Chevy's is Americanified Mexican food.

On top of that, when I go to eat dim sum I want the following experience.  I want a big restaurant with lots of tables for 8 or more people..  I want it to be busy.  I want people pushing carts around with all the food on it to look at and point at.  I want my table full of 10 or more types of food within 5 minutes of sitting down and I want chili sauce and Chinese mustard.  And, after having eaten 10 to 15 kinds of food I want it to be cheap.  $10 a person.  The cheap plates as low as $1 a plate and you get 4 items per plate.

In Japan so far what I get is:  A small restaurant with most tables seating only 4 people at most.  No carts, instead I get a menu.  I order from the menu and items come one or two at a time with several minutes between the time I finish one set and the time I get the next.  For sauces I get soy sauce, vinegar, spicy oil.  At $4 plate and often only 3 items per it ends up being $25 a person or more.

On top of that some items are different.  Japanese apparently don't like Char Shu Bow so they mostly don't exist. (BBQ pork buns or Cha Shu Man to the Japanese)  Instead you get non-BBQ pork buns which to be honest are bland as hell.  The Japanese also apparently don't like the white sesame paste inside deep fried sesame balls so instead they put anko paste inside (red bean paste).  Both of these things exist in China I'm sure and maybe in some region they are common.  But, as I'm used to it different I don't like it.  Especially as you can get Buta-man (non BBQ pork buns) at any combini in Japan and anko beans are in 90% of Japanese desserts so when I go to a Chinese restaurant for dim sum I want something I can't get other places, not more of the same.

And of course because the sauces are different even the stuff that is the same as L.A. does not taste the same.

After about 6 or 7 of those kinds of experiences I stopped going to dim sum in Japan.

But, I had seen the kaiten dim sum place a few times when I was in Odaiba.  It's very popular and I got to thinking, if nothing else at least I'll get the dishes fast.  Not as fast as a real dim sum place but faster than a normal Japanese one.

So....how was it?  Surprisingly it was not bad.  They had a pretty good selection.  It mostly came fast.  And, it was mostly good considering all the above stuff. 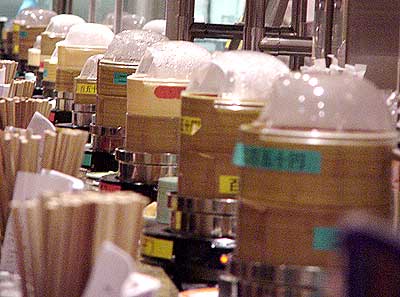 Most of all it was just fun and interesting.  The conveyer has a steamer built in every 4th position so the items that need to be kept steamed are....kept steamed.  We must have eaten 15 different dishes and it was not a bad price.  We got out of there for about 2500 yen each which was less than I was expecting.