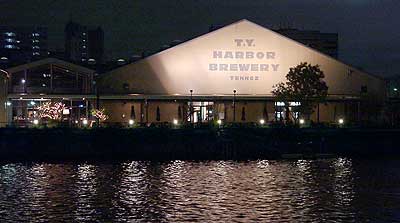 It's right down by the water.  To get there to take Yamanote line to Hamamatsucho (or Oedo line to Daimon which is basically the same station) and then take the Tokyo Monorail one stop to Tennoz Isle, a small island in canals in that area of town.

There something about the area that makes it seem separated from the rest of Tokyo more than just the that it's on a small island.  Probably even though there are several office towers it's just not as busy as other parts of Tokyo.

The restaurant is right down on the water.  If the weather is nice they have patio seating which is great.  Unfortunately the night I went there was a typhoon outside.  Inside there is a large bar section and a separate dining room which sadly does not have a descent view.

Fortunately the food was exceptional.  Their menu is available on their webpage in both Japanese and English.  My impression is the get many English speaking customers so the staff are prepared for that.

The restaurant is modeled after a "California micro brewery" which I guess is a style the owner fell in love with in California.  As such they brew their own beer.  I'm not a beer person so I couldn't tell you if it's good or not.