My friend Scott turned me on to these.

Sharp makes a line of personal digital assistants (PDAs) collectively known as Zaurus.   They make both English versions and Japanese versions from simple versions with not much more functionality than a calculator up to super versions with color TFT displays and built in digital cameras. 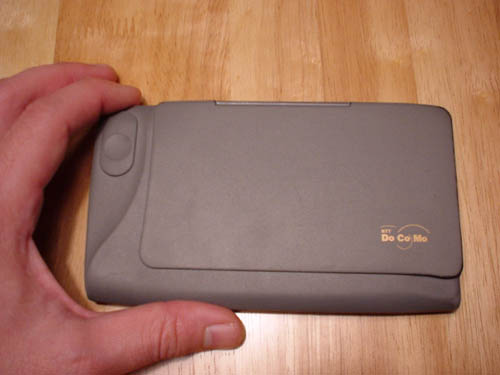 The Japanese versions all have a pretty good built in English To Japanese and Japanese to English dictionary and they have Kanji Character recognition.  This is great for learning Japanese as you can sketch the Kanji and if you're lucky, look up a word.   This is great for riding around on the trains in Tokyo or trying to read some Japanese literature and much easier than using a huge and heavy Kanji dictionary.

Unfortunately, as they are built for Japanese speaking people it does take a little instruction to learn how to use one.  Also, they do require some knowledge of Japanese in general to know when you've found a match etc. 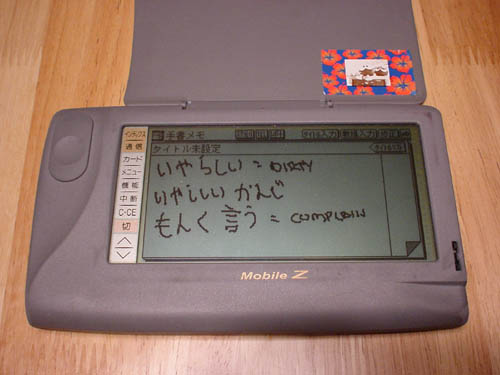 I purchased the Docomo Mobile−Z model.  About 20000 yen at Yodobashi Camera in Shinjuku. (about $170).  The Docomo model comes with an adapter cable for connecting to a Docomo Keitai Denwa (portable phone)   Docomo is a portable phone service provider in the same way that Sprint is a portable phone service provider in the United States.  The Docomo model, as well as most of the models above it, have features for sending and receiving e−mail, faxes, browsing the web etc, none of which I've ever used as I didn't feel like figuring out how to sign up for service since I didn't think I'd really use those features.  It also as a calculator, character based notepad, image (sketch) based notepad, calendar with alarms, clock and even a train/subway map for the Tokyo area.   I was told by a friend that there is a slightly cheaper version minus the e−features.

As far as I can tell, all models have the exact same Kanji input and dictionary system.   At least at the time of this writing.  You can see the various models at http://www.sharp.co.jp   If they haven't rearranged their webpages then the list of models is here http://www.sharp.co.jp/sc/excite/zaurus/zaurus-index.htm

As for using the dictionary features, which is the reason I purchased one, here are just the very basic instructions to get you started.  Note: I'm not going to claim I actually understand all the Japanese here or that I am interpreting this correctly but it seems to work for me.  I learned most of this from Scott. 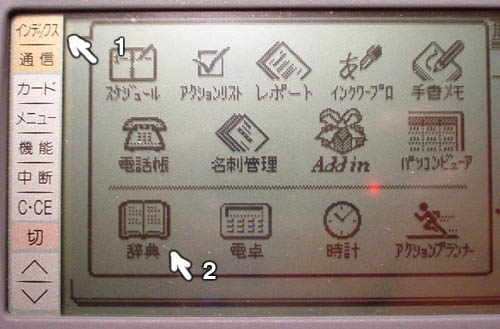 Once you turn in on, from almost anywhere in the system, pressing the "INDEX" button (1) will bring up the menu of applications that you see here.  Clicking on the dictionary icon (2) brings up the dictionary screen. 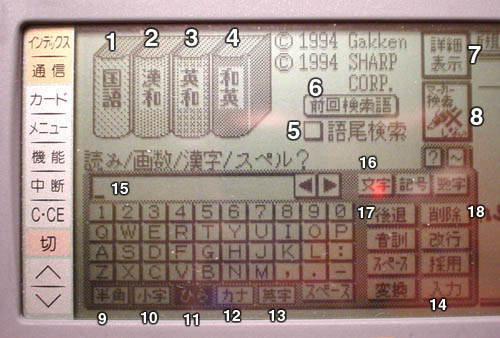 1−4) These are the various dictionaries.  Once you've entered a word to lookup you select a dictionary to use.

This is the QWERTY entry system.  Depending on the options selected (9−13) you can enter hiragana, katakana or roman characters. 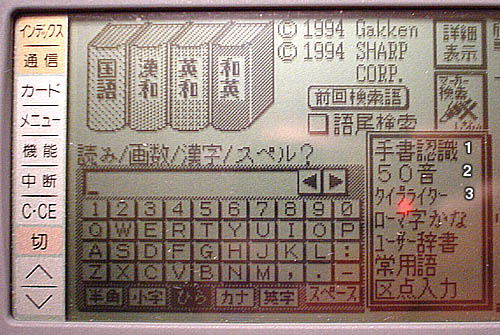 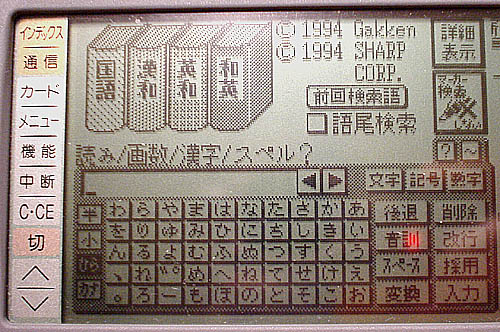 Here's a screenshot of Kana entry mode.  On the left you can see the buttons for half−size, small, hiragana and katakana respectively. 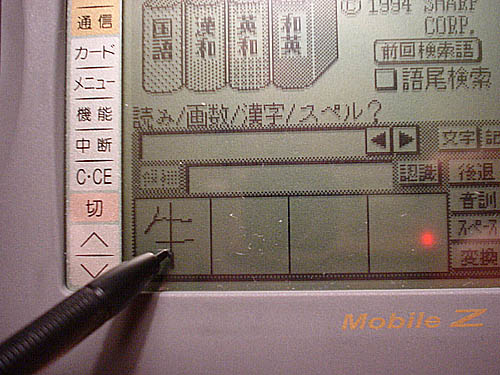 Here is Kanji input mode.  You can see here that I have entered a Kanji character with the stylus (pen) that comes with the Mobile−Z.  The two most difficult things about this system are one, there is a time limit.  If you lift the pen from the screen for more than a few seconds it assumes you are finished and tries to figure out what you entered.  That's great once you get used to it as you just scribble kanji as fast as you can across the 4 boxes and it will recognize each one in turn even while you are entering the next one.  The other major difficulty is that it is stroke order dependant.  That means that unless you know the correct stroke order for a given Kanji you'll often have little luck getting it to understand you.  Of course there are some rules you can learn about how Kanji are usually constructed.  If you know those rules it's almost never wrong. 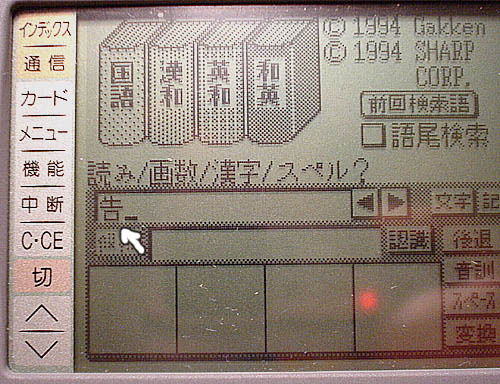 In this case I purposely messed up and you can see that it came back with the wrong kanji.  Clicking on one Kanji character brings up a list of possible alternatives. 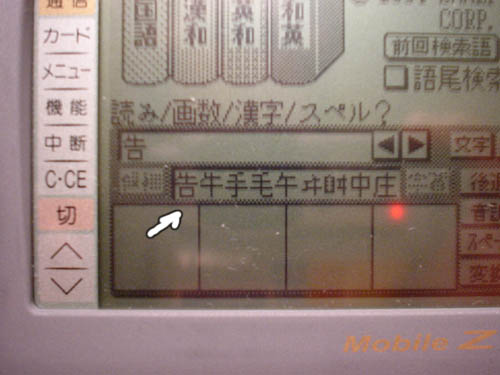 Here you see the alternatives and you can see the character I was looking for is the second alternative. 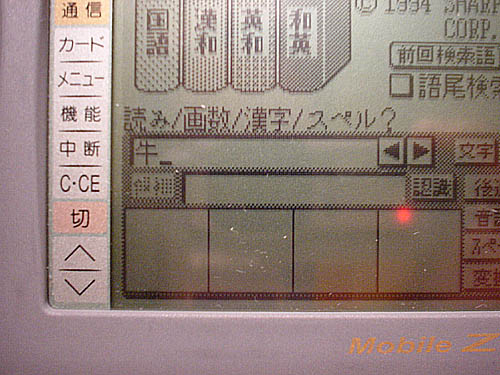 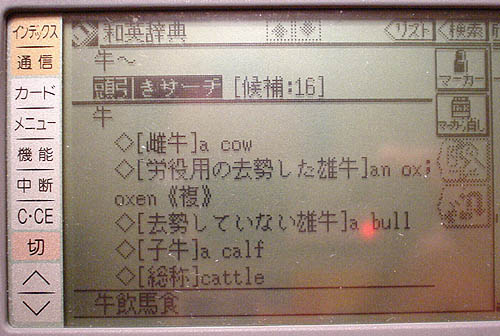 And here is what I get.   You can pretty much gather that this character has something to do with cows. 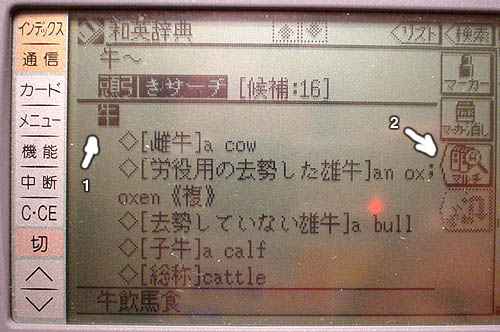 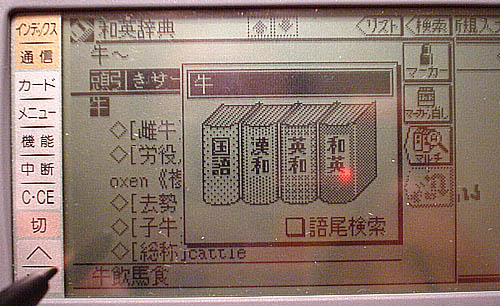 This allows me to select another dictionary and look up the highlighted word. 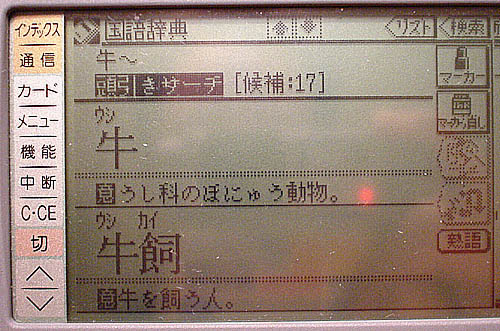 I chose the first dictionary (the Japanese dictionary) and here you can see above the character's pronunciation in katakana which reads USHI. 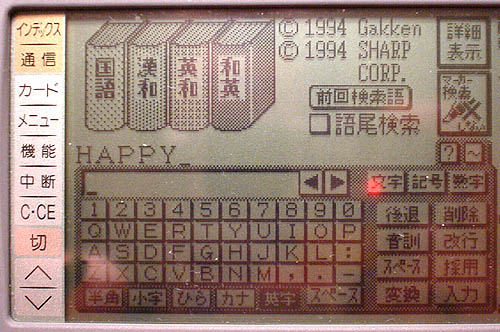 Here is an example of entering the word "happy" in English. 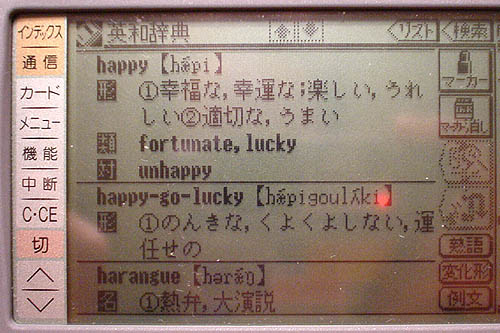 and the results a fter choosing dictionary 3, the English to Japanese dictionary.   Then I would highlight one of the answers and use the 1st dictionary to find the pronunciation.

I would recommend you get the same Zaurus if you want it for the purpose of learning Japanse.  From what I can tell the expensive versions of Zaurus have exactly the same dictionary system.  The larger Zauruses with the color displays are (1) larger and heavier which is not has good for carrying around and (2) use up their batteries quicker.   Like in 10 hours or less.  My Zaurus has typically lasted 2 to 3 months on one set of batteies.

This system is not perfect.  Some of the problems I've found are:

1) It is not a Kanji dictionary.  In otherwords you cannot enter a single Kanji and look up its meaning.  You can only enter words so if the Kanji you enter is generally not used by itsself as a word you will not be able to look it up.

2) It's meant for Japanese speakers not for English speakers learning Japanese.   There are no extensive grammer examples nor are their explanations of when to use a particular word.  For example in the Happy example above you can see that it lists 4 words for the first meaning and 2 more for the second (koufuku, ????, tanoshii, ureshii, tekisetsu, umai..  Which one is correct for your situation is not clear.  One way to find out is to select each one, one at a time, and then look them up in the Japanse to English dictionary and see which one translates the best going back.  Example: I tried this here can I got koufuku = happiness, tanoshii = pleasent/happy, ureshii = glad/happy, tekisetsu = a right answer, umai = nice/delicious

3) the interface could be a little better.  For example if it had a back button that functioned similar to a web browser so that I could back up several previous words back.  The problem as it is now is that for example when I looked up "happy" and then I highlighted the first word "koufuku" and then seached for that to find its pronunciation I then wanted to lookup the next word under "happy" but since my last search was for "koufuku" I had to type in "happy" again.  If it had a web browser like BACK button then I could just hit BACK a few times until I got to the "happy" translation page.

4) Because of the Kanji recognition system being stroke order dependant I often can't get it to recognize the kanji I'm trying to enter.  Of course my friends that know the order well have no problems.  On the otherhand the Windows95/98/NT IME doesn't have the same problems as it is less stroke order dependant.

Ultimately I wish somebody, maybe even me, would create the ultimate PDA software for studying Japanese.  In would run on a good PDA, one who's batteries last weeks not hours.  It would have great kanji recognition.  The entire text of Jack Halpern's "New Japanese−English Character Dictionary", a nearly unabridged Japanese to English and English to Japanese dictionary and the entire text of Seiichi Makino and Michio Tsutsui's "A Dictionary of Basic Japanese Grammer" and "A Dictionary of Intermediate Japanese Grammer." and maybe even a few more.  I know the market is probably not huge but I'd be happy to help on such a project if anybody is interested.

There is also another electronic dictionary that has been recommended by many called the Wordtank by Canon.  I just ordered one.   They are a little expensive.  About $250 + another $30 for an English manual + another $70 for an extra "current words" module.  It does not have pen input so it does not have Kanji recognition. Also it appears from the ad that it is probably also more geared toward Japanese speakers learning English instead of visa−versa.

Some people have been asking about which sharp to buy.  Well they stopped making the model on this webpage. At least I couldn't find it while I was there this December.

The other option right now is to get a Japanese Windows CE system like the ones at Casio.  I think the cheapest black and white model (as opposed to color) was about $400. The advantages are

Some things were nicer in the interface. For example the area that you enter a word has a history so you can list the last 5 or 10 words you looked up. Some things were worse (or I didn't understand the interface). It appeared that the history was separate for English to Japanese vs. Japanese to English so that if I made a mistake and entered the word in the wrong mode I couldn't just pick the other mode and look it up. I had to re−enter the word. This is not true on the Sharp but it could be that I just don't know how to use it.

I will probably get one in June or July and I'll post my experience here. As I mentioned above, the problem with these is they are meant for Japanese speaking people learning English but, if I could get JWPCE running on them AND use the Kanji recognition it would be heaven 😊

the red dot in all the pictures is on LED on the camera I used.   I suppose that's bad design on the part of the camera maker.