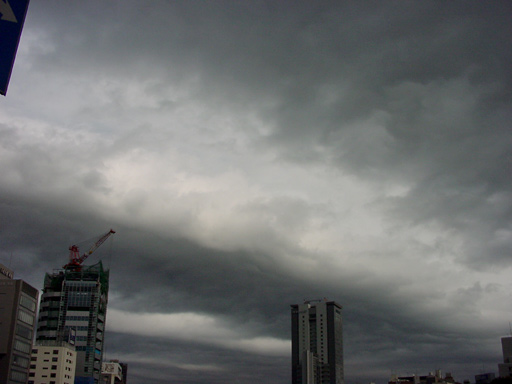 I actually lost some better pictures of these clouds.  A bunch of coincidences piled up.  First I had forgotten to empty my memory stick that was in the camera.  I didn't expect the memory stick to fill up but I forgot that the day before I had put some MP3 files on it as a test on somebody's MP3 phone.  Also I have several memory sticks but I had misplaced them and hadn't taking the time to find them

So, one day we had a kimono day at school and I wanted to take pictures of as many people as possible wearing kimono's so when I ran out of space I deleted a bunch of images.  On the small screen I forgot why I took these pictures.  At a glance they just looked like pictures of Iidabashi which I had alot of already.

Portable Kareoke
The cost of suicide in Japan