Looking for good Italian food in Tokyo?  My friends Pat and Austin introduced me to Salvatore 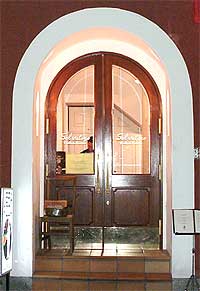 Japanese Italian food is just that, "*Japanese* Italian".  It's everywhere.  Probably the second most common food next to Japanese food if you don't count fast food places.  Personally I enjoy it but I know that if you are looking for real Italian then you are going to have to do a little searching.

My friends Pat and Austin happen to know such a place.  It's in Naka−Meguro just 2 minutes from the station hidden almost under the train tracks.  It's got a slightly imposing enterance and so actually I had passed by it several times without giving it much of a thought thinking it was probably out of my price range. 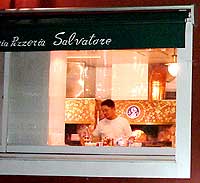 Then one day we were eating at a cheap izakaya just across the river from this here and Pat and Austin told me I just HAD to check it out.  I guess they actually go 2 or 3 times a week as they work just a few blocks from here.

When we went we had Pizza as that was their recommendation.  6 of us ordered 5 pizzas.  It was great.  Japan generally has 2 kinds of pizza.  Japanese Italian which is pizza on a super thin crust.  It's so thin it might as well be a Mexican flour tortilla.

The other kind is Japanese American pizza, ie, Domino's, Pizza Hut, Shakeys.  The Japanese actually do that style better than Americans since they give you so many more topping choices.

Salvatore has an entire menu of Italian dishes though.  Various pastas, gnocchi, cannelloni, seafoods etc.  I'll definitely be going back to try the rest.