Pizzicato Five is has been my favorite band for the past 4 or 5 years since I first heard them on Live 105 when I was living in the San Fransisco Bay Area.

Is surprising, they are probably the most popular Japanese group in the US but they are not that popular in Japan.  That's not to say they are not popular there but ask 15 people if they've heard of PeeCheekaato Fai Vu and only 1 will say yes.

There are lots of fan sites dedicated to them so I'm not going to put much information here about them except for possibly a few things that other sites might not mention.

First, one of the best places to find their albums in America is probably at CDNOW.  Here is a link to their stuff (Pizzicato Five)  They don't carry everything but they probably carry the most of any place in the US.

And here are some links to specific albums I'd recommend.

The best place in Japan is the Tower Records in Shibuya.  It's surprising but they've been fairly prolific and so specifically at that Tower records they have 3 or more whole shelves of CDs by P5.  The average group might have 1/8 of a shelf or so and many hit groups in Japan have like 1/2 of a shelf.

Pizzicato Five has been around for many years.  I'm not sure of their entire history but I know that a couple of my earlier albums sound like they are by a completely different band.

Other than that Mr. Konishi, one of the two people that currently makes up Pizzicato Five (P5) has also produced several other artists on the side.

One not well known album he did was with an woman named Natsuki Mari.  My understanding is that either she's a famous Jazz singer or she's a famous TV star.  I'm not sure which and it could easily be both.  It seems common in Japan for stars to move around among different media. 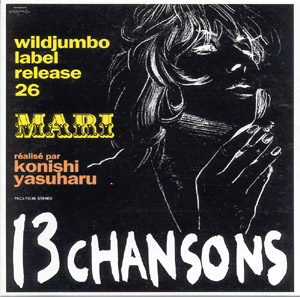 A friend of mine, Atsuko, turned me on to this album while I was living in Japan and since then it's been one of my most listened to albums.  I love it.

Here are some excepts from the album.

I'm sure putting these excepts here is technically illegal but as I'm not putting the full songs up here it seems to me all this can really do is make you want to purchase the album which is something I think the publisher and artists of the album would want.  If you are the publisher or artist of this album and you want me to remove this stuff please speak up.  Hopefully you'll have a pointer where I can point people to get this album.

I'm not sure where you can get it.  It was probably a very limited release album.  I was told by Tokyo Pop that they will take special orders for pretty much anything so you might try with them.  The only numbers I see on the CD cover are TKCJ−71336, 1998 Manufactured by Tokuma Japan Communications Co., LTD and the barcode number 4−988008−393033.  Hope that helps.  If you have any luck tracking it down please tell me about your success.