Thank to my friend JP I finally got to visit Osaka and Kobe.

I didn't really have that much time there. In fact I really only got one day in Osaka and one day in Kobe so don't take anything written here as a statement of truth about either. This is just my impressions of both.

I really haven't traveled much in Japan, mostly because I never have anyone to go with. Still, I knew that the shinkensen (bullet train) was expense. It was $300 round trip to go to Osaka from Tokyo. Compare that to say an airfare from Orange County to San Jose, about $150. Where do the Japanese get all the money to do all the traveling they do?

I wasn't sure what to expect as I really had zero knowledge of Osaka. I went up after work on Friday. The ride takes about 3 hours. The only bad part was I was seated directly behind the sickest guy on the train. He practically coughed up a lung during those 3 hours. I felt sorry for the guy buy having been sick 3 times in the last 2 months I was really not looking forward to having his cold too.

Anyway, I got into Osaka at 10pm and proceeded to a club where my friend JP was going to DJ. His set was great. Mark Sherry as also on that night. The club was small so we got to meet him. He was very down to earth, very cool. DJ Energy−Dai played an amazing set that had so much energy after dancing to it we were all completely exhausted.

The next day I set out to explore Osaka or at least the area near where I was staying. I was in the Shinsaibashi area which I would basically describe as Tokyo's Shibuya, Harajuku and Ginza all rolled into one. On the main thoroughfare was some major chains and department stores like Ginza but on the streets behind were all the hip hop pop clothing stores of Shibuya and all the used clothing and second hand stores of Harajuku as well as all the requisite characters. Tanned girls with blonded hair and white makeup. J−style goths. J−Rapper posse wannabes, etc.

I'm clearly a little jaded or rather, given that I've lived in Tokyo for a total of almost 6 years now I wasn't snapping pictures like crazy since I'd seen most of it before. What follows is things that stuck out for me.

The first was the shear amount of wires.

At least in this area of town quite a few of the smaller streets had so many wires you'd think this is probably where the matrix will start.

Otherwise there were quite a lot of interesting signs

Before I came to Osaka I asked everyone I could think of what I should do there. They all said Osaka is famous for Okonomiyaki and for Takoyaki. Takoyaki is generally eaten like a snack so I opted for that first. 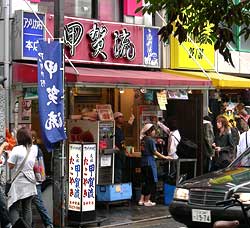 I found this little place near a park where everyone was standing in the park eating takoyaki. The park is called (三角公園) sankaku−koen (triangle park) and the takoyaki place is called Kougaryuu (甲賀流) and is apparently fairly famous. I'll be honest though, although it was great (I love takoyaki) I couldn't really tell the difference between that an any other takoyaki I've had. Maybe I should have tried a different place 😊

After that I met up with my friends JP and Mai and we walked around other parts of Shinsaibashi and Namba. Japan has a lot of shoutengai (商店街) or shopping streets and many of them are covered. Basically the street started as an open air street and then at one point the stores or city got together and put a roof over the whole thing so people could shop even when it's raining. Well, the one in Osaka is the largest I've seen. I'm sure there's a bigger one somewhere or else I would have probably seen signs "Japan's biggest shoutengai" but still, it seriously seemed at least a mile long! 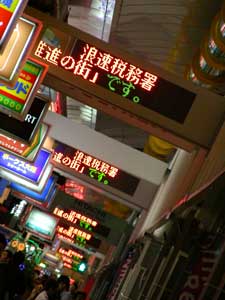 We walked through it toward one end and then a few blocks this way and that to Osaka's famous Denden Town which is their electronics district. Very similar to Tokyo's Akihabara district in terms of the type of stores that are there but Denden town has its own atmosphere. For one, unlike Akihabara the main street has covered sidewalks. I'm not sure if that's a plus or a minus. It can make it feel more crowded because the sidewalk is pretty thin but then it does keep you out of the rain which was good for us since it started drizzling that day.

One thing that stood out though, under the roof over the sidewalks there were LED signs, literally probably more than 100 of them down both sides of the street for 8 or more blocks showing ads for the various stores.

JP took me to a famous chain of stores called Super Potato which is a retro game shop. They had 2 branches in Denden Town. In one there was this Super Nintendo System (SNES) Cartridge for which they were asking nearly $6000.00!!! It's a dodgeball game made by Technos. Under the price is says "but!, there are only 8 in the world!".

In the other branch the coolest thing was the floor. They had made tiles out of laminated screen shots from old 8bit games.

Lots of natsukashii (nostalic) moments in there. I'm sure I have a few friends who would consider tiling a wall in their house or apartment that way.

In an arcade on the way back I saw this character in a UFO catcher machine. I'm nearly 100% sure it's supposed to be a super exaggerated Disney's Goofy. 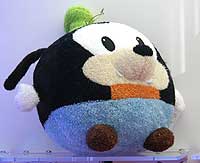 No idea if it's licensed or not but funny has hell.

For dinner Mai had other plans so JP took me to this Sammy/Sega run place called Dontoubori Gokuraku. It's 4 floors of an 8 story building all designed to look like an (1920s?) Japanese city. It's only 300 yen to get in and then they have stores and lots of restaurants. They give you a credit card like thing you use to buy your stuff and then you pay for it all when you leave. That way all the stores don't have to deal with change. 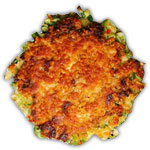 grilled onions. What it actually is is more like grilled onion pizza or rather okonomiyaki except instead of being made with some kind of pancake like batter it's made a with a base of chopped green onions, some kind if white slightly creamy sauce with something grilled breadcrumb like on the top. It came with a tangy sauce to put on it as you like. It was awesome! I wish they had something like that here in Tokyo. (probably do I just don't know where) It was really good and much lighter than okonomiyaki. 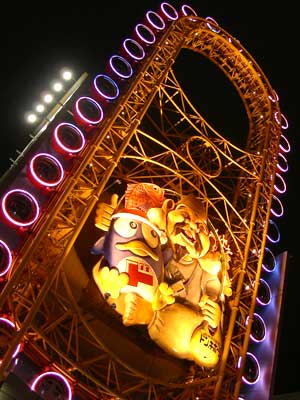 Here in Japan there is this chain of discount stores called Donkihotei. They are all over the place and a lot like a K−Mart with a little bit of everything, food, clothes, household goods, sporting goods, toys, electronics, jewelry, etc. The biggest difference usually being that the entire contents of a K−Mart is packed in a store about 1/6th the size. Kind of like Fry's Electronics (although not quite to Fry's level) they often have some kind of attraction. The one in Roppongi for example has a large fish tank in front. The one in Osaka has this giant rail based kanransha (Ferris wheel). That picture doesn't really express how big it is. Each of those circles is holding 4 people. You can check out this picture which shows the entrance to the building for a reference. 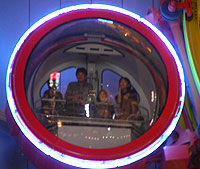 loop they flip around to face the other side. Here's a short video showing the cars flipping around (divx).

I find it interesting that Japan has so many giant Ferris wheels and as far I know the U.S. has none. When I say giant I mean in Tokyo along there are at least 4 of them that are over 330ft tall. Your average carnival Ferris wheel in the USA is probably no more than 60−80ft. Is it some kind of law that prevents them from happening in the USA? Is it that no one would ride them? I know here in Japan there is a stereotype or typical picture of couples going on the Ferris wheel and kissing, probably especially because being so big they are like small private rooms. Maybe we need to start that trend in America.

The last picture I took in of Osaka is this 8 story wall of neon signs.

I guess it's the most photographed thing in Osaka.

The next day we went to Kobe which is only about 20−30 minutes by train from Osaka. I think it cost 780 yen, about $7. My friend Miki lives there and I hadn't seen her for 4−5 years so it was nice to catch up.

I probably should have taken more pictures but I can tell you Kobe is extremely beautiful. It's a port city and feels a lot like Yokohama with a very nice downtown harbor area with lots of waterfront boardwalks and restaurants but it's also directly in front of mountains so it's very scenic.

I asked Miki for a suggestion for something Kobe−ish for lunch. She said Kobe is famous for bread, and for beef of course. We end up deciding on eating akashiyaki which is a takoyaki like thing and I guess it's from the area next to Kobe. They were almost like bite size omelets each with something different inside. We ordered some with shrimp and mayo, some with tako (octopus), and even some with cheese, tomato and beef (ie, pizza flavored). They come with the same sauce you put on takoyaki plus some clear soup broth you dip them in. They were really good.

Next we went down to the harbor for a bit. It was a really nice day so it was packed. After that we checked out this I guess relatively new attraction called Sweets Harbor. It's a place with 15 different sweets shops. Cakes, pastries, tarts, ice creams, puddings, etc. It's run by Namco which has been setting these things up all over the place. Tokyo has a goyza festival for example. There's even a massage forest. Anyway, we checked out all the desserts and ended up settling on a cold stone creamery style ice cream place. They told us it would be a 30 minute wait but I think it end up being only 15.

After dinner it was a quick hop back to Osaka and then on to the shinkansen to get back to Tokyo. Thanks to my friends I had a great time. I would love to go again. I hope I can do it soon. 😊