I love movies all kinds. From Sci−fi to Horror to B−Movies to Dramas to Love stories. I probably own about 150 of them on video or laserdisc. In fact about the only kinds of movies I dislike are movies about adultery. Some of my favorites are 'Blade Runner', 'Brazil', 'Raising Arizona', 'Moonstruck', 'Say Anything', 'Love Potion #9', 'The Parent Trap'...

My favorite way to see a movie is to go see a blockbuster on opening night at the Big Newport in Newport Beach California. It is the largest theater west of New York. It holds 1200 people and has become quite a tradition for Orange County moviegoers. We get tickets early in the day (like around noon) and then have to stand in line for 2 to 5 hours to make sure we get good seats. That may sound really boring but we turn it into a party/picnic. People bring dinner and chairs. Some have dinner delivered or even catered. Some people bring games and generally we have a good time visiting with friends.

I'm often the person that gets the tickets and organizes my friends into going. The most people I've ever been in line for is 90 and that was for Jurassic Park.

Recently we stood in line for the Star Wars movies as they were re−released. We had about 30 people for each movie and one of my friend's sister showed up for the same movie and she had 30 people with her too.

The line for the 10pm showing of 'Return of the Jedi'
The people in the very front of the line had been there for 3 days.

Tickets for the Star Wars movies went on sale at least a week before opening night and sold out quickly. I was lucky that some of my more fanatic friends kept me informed or we would not have gotten tickets. Here are some of my friends that showed up for the movie. 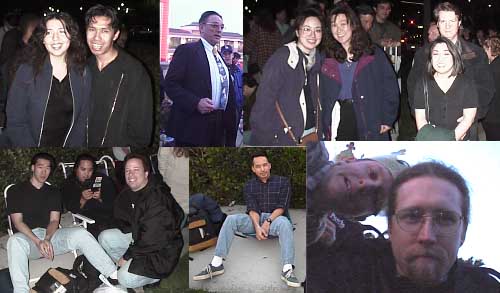 From left to right, top to bottom. Yolanda and Neil, Jim (the manager of the theater), Pam and friends, Mark and Christine,
Willis, Tom and myself, Ron, Ken (with glasses) and his friend

The theater is across the street from Fashion Island. A very trendy shopping mall. There are lots of restaurants including a Hard Rock Cafe, an El Torito Grill, a California Pizza Kitchen, a Cheesecake Factory, and one of my favorite restaurants, Tutto Mare. There are also two food courts. Your average food court with a McDonalds and Panda Kitchen and places like that and then a very upscale food court with things like sushi, Brazilian food and things like that. We often head over there during our wait and pickup dinner. 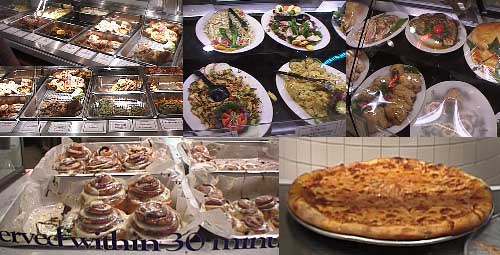 Food from the Atrium food court at Fashion Island
My favorite place to eat is the Deli at the Farmers Market.

Once inside the theater things get really crazy and that's what makes seeing opening night movies that the Big Newport so special. The audience is really really excited to see the movie and that almost always helps make the movie even more exiting.

Inside the Big Newport before Return of the Jedi.
Notice the blowup doll in the left picture and the toilet roll in the right.

The Movie screen was, until 1995, also the largest screen west of New York City. It's still a pretty huge screen and they have a great sound system.

And now, through the magic of my Sony Digital Still Camera DSC-F1. Some pictures from the movie.

Tags: featuregreggman
Comments
All about me!
Places to Eat in Maryland