I bought this scanner to scan 5000 old family slides all taken before 1984.

It's not a bad scanner but there have been a couple of disappointments.

On the other hand I was not able to find many other options. This one might work

As for the Nikon, since most of my slides are old they have dust on them and it was very surprising just how bad they all looked. The Digital ICE feature of the Nikon that removes the dust has saved my butt. I haven't tried dusting the slides but I suspect they will still look better with the Digital ICE feature than without.

On the downside the SF−200 jams all the time. Without modification I think it works an average of 15 slides before jamming. The solutions were 3 fold. 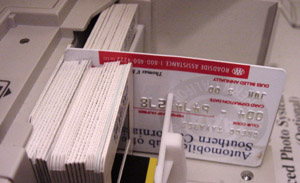 1) tape a credit card in the feeder such that there is only room for one slide to be pushed into the scanner. As it is there is room for 2 slides. This was the first cause for problems. 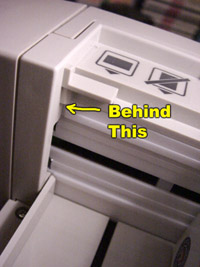 2) Once I did that the problem was that the thing that actually pushes the slides is thicker than 1 slide so it would actually try to push two slides at a time. Since one of those slides is now blocked by my credit card the feeder could often not push the slides in so............I opened up the feeder and put in two rubber washers so that the slide pusher stuck out half as far and therefore only pushes one slide. 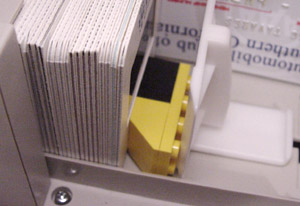 3) A new problem came up though, the slides would actually catch on each other often as the inside edges of the frames passed each other. The problem was the thing that puts pressure on all the slides pushing them toward the feeder mechanism was pushing only on the leading edge. The solution was to take 3 legos, in 4x2 thin, 1 2x2 normal and one underside slanted one and put them between the slides and the pressure thing slightly more on the trailing side.

Since I did these things I've had no more jamming problems but there have been a few other problems in general.

1) My slides are organized into boxes, 30−40 slides per box. 2 boxes of the 50 or so boxes of done so far came out very very blue. I don't know why this is. Nikon says that the scanner does not work well with slides from Kodak Kodachome film. Maybe those two boxes use that film.

2) Sometimes, more often than I would like, the scanner does not seem to focus well. I don't really understand why it needs to focus since the slides should always be at the exact same place in front of the scanning mechanism. It could be that some of the slides are bent but I don't think that's the majority of them.

I will say that the newer slides (slides from the early 1980s) have generally scanned better than older slides so I would assume that new slides, taken in the last few years would be great.

One more thing, it will scan negatives but I have not tried this yet. The bad part about negatives is that it will only do 6 at a time. That means more work for me and so I've been putting that off.

I finished scanning all 5000 slides.  I did get a chance to try a few other scanners because there was a set of slides that had larger than normal image area and the Nikon therefore could not scan it.

It's hard to say if that other scanner would be better.  On the one hand, doing 6 to 36 slides at a time would be nice.  On the other hand it would have required much more work on my part.  Instead of just taking 40 slides and sticking them in the scanner, picking "scanner" and coming back in an hour I would have had to place each slide on the scanner, scan, cut each slide out of the scanned image, save each slide by hand and touch up it's colors and scratches etc.

That means that overall the Nikon was the probably the best solution.  It also worked incredibly well on certain slides.  I'm not sure what made those slides special.