The News Deli is this relatively new chain and here in Tokyo and they are popping up everywhere.

There's one in Shinjuku on the west side of the station near Omoideyokocho.  There's one in Ueno, Daikanyama, Meguro, Omotesando and several others. 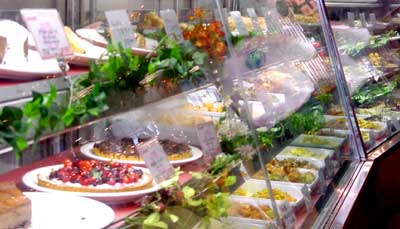 They have a very large menu with a little bit of everything.  Hot cakes, sandwiches, noodles, desserts, pasta etc.  Some places even have dim sum or yamucha.

But, my favorite thing is to go up to the deli counter and order 4 or 5 of their various deli items.  They have over 100 kinds and some of them change.  I get more variety and I get to try new stuff which I love and so far it's all been pretty good.

They are also generally open very late (4am) at least at certain locations like the Shinjuku location and the Shimokitazawa location.

The atmosphere is casual.  The tables are cheap and the chairs are patio chairs.  Some of the locations are open air like the Shimokitazawa location.  The also all have tons of magazines you can read (not for sale) most of them in English.

I wonder if they would ever make it to the states.  They are probably a little expensive but otherwise I think they would do pretty good.

Tags: japanrestaurants
Comments
Attack of the Quickies
MD:Now up to 193 hours