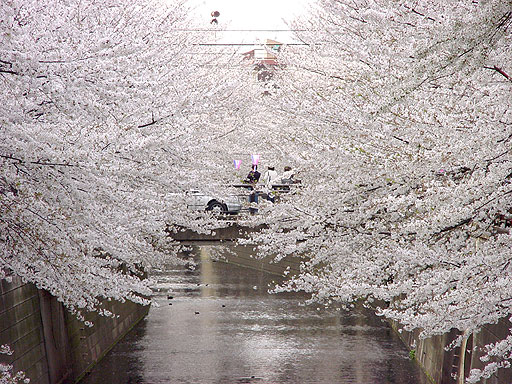 After going to Chidorigafuchi and missing the Yuuzakura (night viewing) I was pretty determined to go back. Then, a couple of days after going to Chidorigafuchi I was on my way to visit my friend Yuki and family and I passed by Nakameguro around 6pm and from the train I got a glimpse of the sakura festival in Nakameguro with lamps all long a small river. I decided I had to check it out. 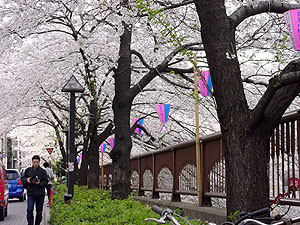 So, 2 days later on a Monday after school I went to Nakameguro around 2pm and here you can see what I saw.

There's a river running through the neighborhood of Nakameguro and along both sides for probably a mile are tons of sakura trees.

The trees start right next to the train tracks and continue quite a long ways. 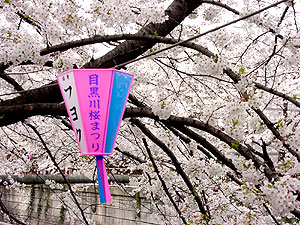 I walked for what seemed like a mile until I hit a big street called Yamatedori.

I could see that the trees continued on the other side of the big street but that street was elevated and at the point it crossed the river it was part of the ramp up to becoming elevated so in other words it was completely blocked with no direct way of getting to the other side. Think if a freeway was crossing the river. So, I decided that was far enough and I turned back and walked down the opposite side of the river. 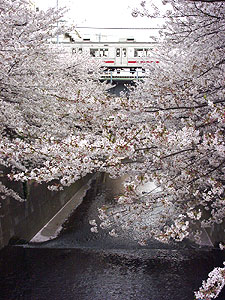 Since the first time I had passed on the train a couple of days earlier it was darker and I could see all the lamps were lit up so I wanted to stick around until it was dark to check it out.

There's a great cafe in Nakameguro called the Organic Cafe that I really dig. For one, it's not Starbucks. It's got a good vibe, good music and it's not too clean. In other words it's got atmosphere instead of being sterile. Lots of magazines and descent food too.

I grabbed a table, some lunch and studied my Kanji for a couple of hours until it was about 6pm. It wasn't quite dark yet but I was tired of waiting and the lamps were on so I went out and checked it out. 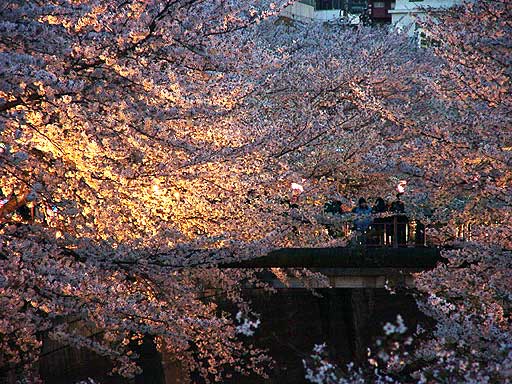 What can I say. It is a different experience than in the day. The lamps, the reflections. They put extra lights along parts of the river pointing up into the trees 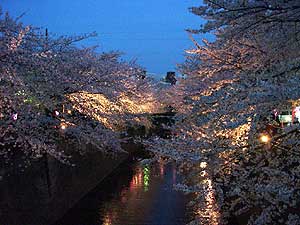 One benefit of not knowing Japanese is that you won't see how commercial it is. Every lamp is labeled with a sponsor. Of course I guess that's much better than paying for the lights with taxes.

The lamps say Nakameguro Matsuri and matsuri means festival which would suggest that on some days there is actually a festival here with stands and food. There were some people picnicking along the river during the day squeezed in between the road and the fence. I guess the view is worth it. 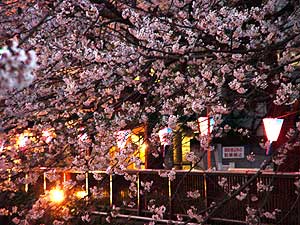 After this I also checked out the night viewing at Chidorigafuchi but those pictures didn't come out, probably because it was too dark and I didn't have a tripod and personally I liked Nakameguro better for night viewing of sakura.

Chidorigafuchi had the advantage that there was a huge festival going on when I got there and I was able to eat some delicious stuff like a oden and yaki imo. Yummy!!! 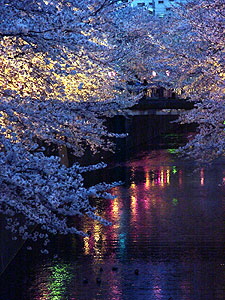 Also Sumidagawa, a much bigger river, is supposed to be a great place for viewing sakura. I've been there at other times but I haven't checked it out during sakura season.