I'm sure this kind of thing exists all over the world but here in Japan, Nabe is a very popular kind of food, especially for home cooking.

Nabe actually just means "pot" but if someone says, "hey, you wanna come over, we're going to have nabe" they generally mean they will have a clay pot, called "donabe", on the table that looks like this

They fill that with Chinese cabbage, water, add any other veggies they like like onions, sliced carrots, spouts, then they generally add some kind of meat, chicken or thinly sliced beef or pork.  Add in water and soup flavoring and the put the nabe on a small portable burner you set in the middle of the table.

You bring it to a boil, let it simmer for about 10 minutes and then pull some out with your chopsticks and a spoon into small bowls and eat. As it starts getting low on ingredients you add more stuff in until you are stuffed.

You can buy a family size clay nabe "donabe" for generally about $10 − $20 at any discount store in Japan.  The burner will only be $15−$25 at most and they sell the gas for the burners at any super market and probably even at most convenience stores.

Anyway, this may have been going on for a while but last winter, nabe is a fall / winter dish, I noticed they carry single serving nabe the many convenience stores.

Here's a kimchee and pork nabe with some tofu in it. 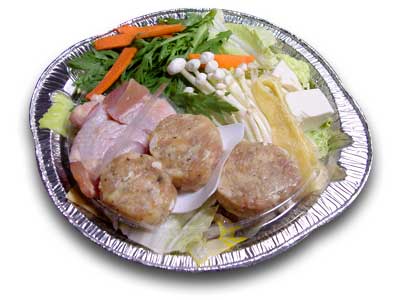 They packages are made fresh daily. When you open one the meat will be separated from the veggies by a cellophane rapper and if there are noodles those will be as will. Inside you'll also find a packet of soup broth. 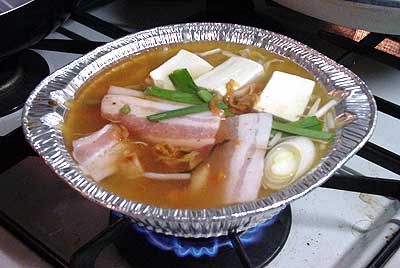 Take them all out, pour in the soup broth, fill with water to the mark inside and then set it directly on your stove.10 minutes later you have piping hot healthy fresh nabe! Yum!!!! 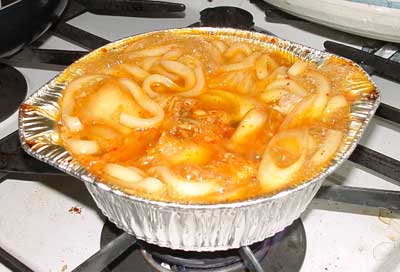 This one came with udon noodles as well. Kimchee nabe (Kimchee is from Korea) is one of the most popular flavors. It's spicy and delicious.