My first trip to Japan!

Last year I got to go to Japan with my friends Craig and Maki McCoy. I was very lucky they allowed me to go with them. I got to stay at Maki's parent's house in Yotsukaido Japan which is about half way between Chiba city and the Narita Airport (or if Narita Airport is 1 hour from Tokyo than Yotsukaido is along that route 15 minutes from the Airport.

I also got to go to Kyoto and see several temples. We rode the Shinkansen there and back (bullet train) and got to stay in a Japanese hotel courtesy of Maki's father.

I met several of Maki's friends. Asian women sure are beautiful. 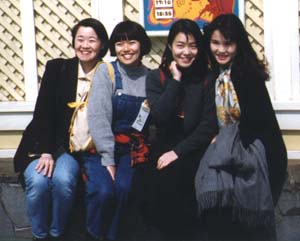 The Women of Kyoto

I'm hoping to go back to Japan for at least a month early next year. My roommates have promised to show me all over.

Tags: featuregreggman
Comments
The Ultimate Greggman Contest
All about me!