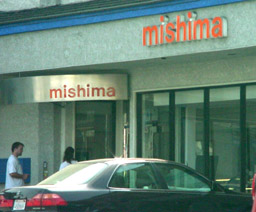 Mishima is a quickly expanding chain of Japanese donburi, soba and udon restaurants.  I think they are up to 4 now.  Donburi is a bowl of rice with stuff on top.  Once they put the stuff on top the name is usually shortened to just don.  For example Gyu Don (Beef Bowl), Niku Don (Meat Bowl, thicker beef), Una don (eel bowl, tastes kind of like tender BBQ chicken), Oyaku don (Chicken and egg bowl)

Udon and Soba are noddles.  They can be served both hot and cold (although I've never had cold Udon).  Udon are thick noddles.  Soba is thin buckwheat noodle.  I'm not personally a big soba fan but cold soba is interesting.  Basically you are given a plate of soba and a small bowl of watered down soy sauce (or something like that).  You add chopped green onions and wasabi to the sauce.  Then you pick up some soba and drop it in the sauce bowl, swish it around with your chopsticks and then eat it.  When you are finished you are given some hot water to pour into the sauce to turn it into soup.

My friends got sick of Mishima before I moved to West LA.  That means they went their alot.  It's gotten pretty popular so there is often a line.  There is one across from the Beverly Center, one at Sawtelle and Olymic, one in Torrence and one in the Brentwood area on Wilshire.  Click here for directions.

Taiko is pretty much the same as Mishima above expect with more variety.  The serve a few more combinations and they serve sushi.  I'd say they are slightly better than Mishima.  There are now to of them.

One in Brentwood on San Vicente just east of Barrington.  The other is on Rosecrans in Manhattan Beach about half way between the 405 and Sepulevda.