I've been meaning to post this for a week now but I was in Sakuraya and noticed the new Sony CD Mavicas.  They are HUGE!!  I have to wonder how long the batteries last burning a CD.  I'm not sure I think it's a good idea to burn CDs directly from the camera.  It would be heavy and you'd have alot more CDs since those CDs only hold 156meg or something like that.  At least the Sharp CD camera hold 720meg on much smaller discs but of course those disc require special readers.

Anyway, I reached for a brochure because I was curious if they had battery life written down (they claim 75 minutes) and instead I picked up a brochure for memorystick products and it had information on the new memorystick duo which according the brochure is supposed to be introduced this year.  Here's some pictures and translations of what it said 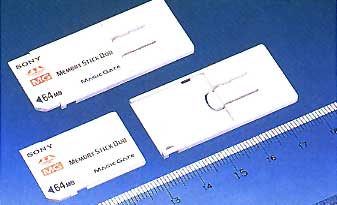 As you can see the memorystick duo is almost half the size of the old memorysticks. 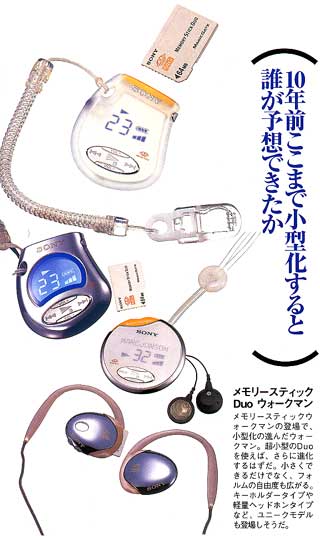 Memorystick Duo Walkman:
The Memorystick Walkman introduced small. The Duo will allow SUPER small. Not only small but freedom of size. Keyholder, Lightweight Headphones, etc, I looks like they will introduce several unique models. 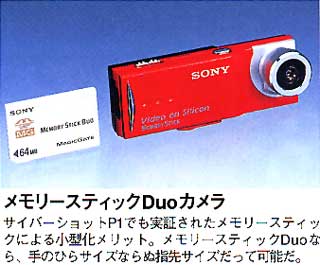 MemoryStick Duo Camera:
CybershotP1 proved that small has merit. The Memorystick Duo will make it possible for fingertip sizes.

(Note: My take the Cybershot P1 is that Sony has convinced people that it's small when in reality it's larger than at least 3 other cameras that were already out well before the P1.  The Canon Digital ELPH,  The Fuji Finepix 40i and at least one other but because of Sony's awesome marketing nobody seems to notice.  I've been to the electronic stores with friends who see the P1 and say "Wow!! That's really small" even though smaller cameras are sitting right next to it!!! 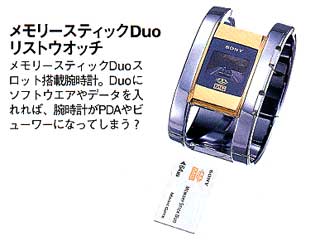 MemoryStick Duo Wristwatch:
A Watch with a Memorystick Duo Slot. Through a Duo you can enter software, data..Watch + PDA + Viewer. 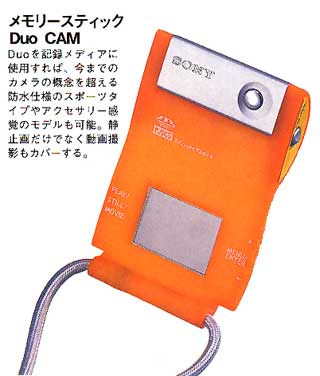 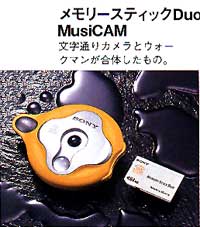 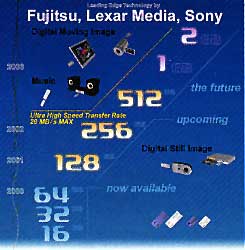