When we where in Kyoto my Mother wanted to go to the Kyoto Botanical Gardens. At first I didn't really want to go but not having any better ideas and as it's right outside the Kitayama subway station so it was easy to get to so I thought, what the heck. Let's go!!!

There were lots of flowers at the Kyoto Botanical Gardens. That's a good thing. I like flowers. I like taking pictures of flowers too. I guess because they almost always come out good. Here's some of the flowers that were in bloom while we were there.

The Gardens were very cool. They are on several acres of land and separated into various areas. From the map they gave us I guess the entrance near the subway is the back entrance. There were several flowers in bloom in that area. Especially Tulips. The best time to come to Japan is arguably the first week in April. That's when the cherry trees are in blossom.

Most of my friends think those scenes were great imaginary visions but my friend Willis used to like to say that you don't need a whole lot of imagination, just look in nature and it's all there. I'm not sure I totally agree but the greenhouse in Kyoto is making me a believer. I wonder if Mr. Miyazaki, the author of Naushika, visited the Kyoto Botanical Gardens for inspiration.

For example check out these trees. Maybe some of you that live in the part of the world where they are common think nothing of them but to me they look like something is growing inside like alien creatures and at any time they are going to burst open and aliens are going to come out covered in alien goo. 😖 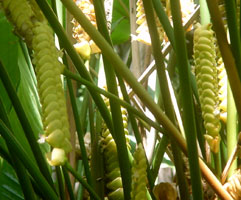 What the heck are these things. Fruit, seeds or bugs. They are about the size of your forearm. Is it one big scary alien catapiller. Maybe it's a bunch of alien larve. Just looking at them makes me itchy. Do they come out at night and crawl down the plants and then regroup into their little units before dawn. They were also fairly bright almost like they were about to glow. Maybe they are radioactive (that would be directly from the mutant jungle in Naushika) 😮 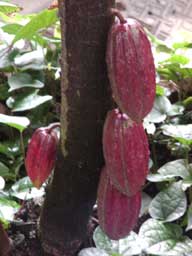 And what are these pods. They don't look like part of the tree they look like parasites. Can you imaging waking up and having these attached to your leg. I was waiting for them to wiggle lose and then jump for my legs. AAHHHHH!!!. What's inside of them. More alien bugs. Red goo. On the other hand maybe these are the most delicious fruit on the planet but I'm not gonna be the first to try them. You first. If they taste good and *If* you're still here in a month, note: I suspect that's is BIG *IF*, then I'll be happy to give it a try. 🤢 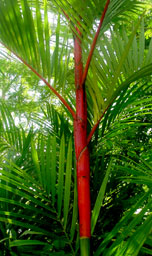 Here's a red tree. Who ever heard of a red tree!! Tree's are supposed to be brown or green NOT RED!!. Fine, your red, then why are your leaves GREEN!!. Maybe this is the result of some kind of alien virus and it's only infected the trunk so far. If I cut this tree does it bleed red blood. Maybe it will grab me like a Venus Fly trap and eat me alive. 😮

If you've seen a banana tree before you know they have flowers like this. We had banana trees in our backyard when I was growing up although we didn't have the edible kind. But now, looking at this blossom it looks to me like some scary tentacle that's going to grab the helpless passerby. Thinking it's just a flower he'll walk by and WHAM! he's pulled up into the tree, strangled and then eaten by a carnivorous alien banana plant. It was hanging like 8 feet down from the top of the tree to about chest level. I ducked by this one pretty quickly and faced it while I backed away just to make sure it didn't get me. 😈 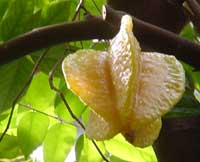 And who the heck designed a fruit like this!?!?!&nbsp. Yes I know it's a star fruit and I've eaten one too. I wonder if I'm still really in control of myself. Maybe that's why I sometimes say the most stupid things. I ate a star fruit once, kind of like eating broccoli, now maybe I'm under mind control by some alien being. 😐 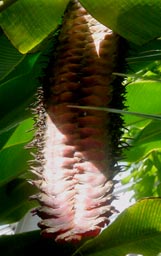 This is clearly not a plant. It's clearly not a leaf. It's clearly not a fruit. In fact it's CLEARLY AN ALIEN TONGUE. It's just waiting for some bald guy to walk through and to look the other way before it takes a big lick of his head. Or maybe it licks the hair off people's heads. That's probably why it looks all hairy on the edges. I mean really, I can probably take the rest of the plants here but this one takes the cake. That's not a real plant is it. Somebody running the place must be playing a joke. I wasn't willing to ask though. They'd all be in on it anyway if they aren't mind controlled by the aliens. 😖

The whole time I was in the greenhouse I was expecting a giant scary alien spider to lower itself down from the mutant plants and bite my head off. Or giant roaches the size of cats to come out of a hidden roach hole and devour everyone in site.&nbsp. AAAAAHHH!!!!

If you ever go to Kyoto I really REALLY suggest you check it out. It was really REALLY COOL. No really, there's nothing to worry about. I PROMISE.....8−D