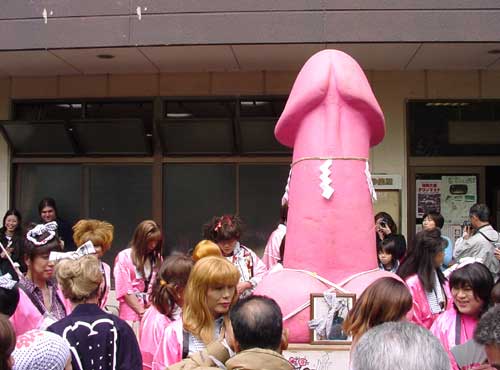 My classmates and I recently made it to the Kanamara Festival in Kawasaki Japan. The picture above should give you some idea of what it's about.

The one we were looking for was actually practically directly across from the station but it was very small and the shrine itself was blocked by another building so it was not obvious where it was.

Every festival has it's drummers. Click here to here them play.

According to my friend Atsuko and also a little flyer she found, originally the shrine was to honor the gods of iron.

There was a iron working building and they were making swords. But, the history of the area is also that it used to be an area with lots of brothels and the workers used the temple to pray not to get syphilis and from that this festival started.

It is now considered good luck, good family etc to embrace one of the big phalluses or to ride the wooden phallus shaped see−saw. 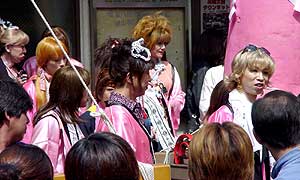 At some point during the festival the mikoshi are picked up by a bunch of people and carried down the street through the center of down while dancing and shaking the mikoshi fairly vigorously. Interestingly, the pink mikoshi at this festival is carried by a group of drag queens. 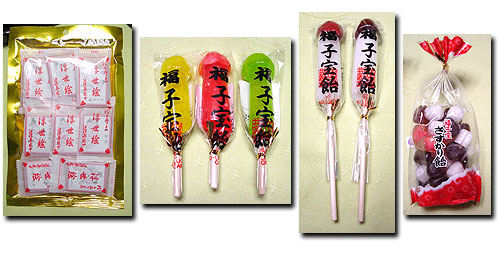 The first package on the left is individually wrapped crackers. If you look closely each package has a picture or actually a card with a picture on it inside.

The pictures look like the ones to the left here. Click here if you want to see all of them. We all speculated if there was any purpose to them other than instruction. For example cut them out, put them in a hat and pick one at random. Or place one on your lover's pillow before bed etc. We tried to get one of our married classmates to give it a try with her husband but we couldn't get her to give it a try. Too bad.

Tags: japanfeature
Comments
Do you know what a billion is?
the machine