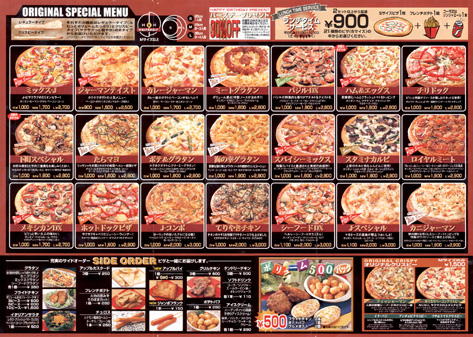 There are two kinds of Japanese Pizza. First there is Okonomiyaki which you can read a little more about here.

The other is "regular" Italian pizza. Or is that American pizza? I don't know. Anyway, so far, Japanese pizza is the best I've had. They start with a pretty standard American style pizza and then add all kinds of stuff not common in America but very delicious. For example here is what's on some of the pizza's in this ad.

#5 is "Basil Deluxe" and is made from Basil sauce, tuna, bacon, crushed tomatoes, Italian sausage

#8 is called I think "Downtown Special" and it has cherry shrimp, squid, dried benito, octopus, cabbage, yakisoba and okonomiyaki sauce.

You'll have to trust me. This stuff is awesome. Actually many of them would be easy to make here. #2, #4, #5, #15. The tuna (the kind from a can like you'd make a tuna salad sandwich with) and the mayo both really make a big difference.

It shouldn't seem all that strange either. Anybody who's been to a California Pizza Kitchen should know that pizza doesn't have to just be cheese and pepperoni.