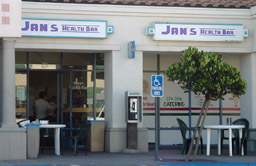 This place used to be really hidden.  It was at the corner of Main and PCH in Huntington Beach INSIDE the surf shop on the corner.  If you didn't know it was there you probably would never notice.  But, a few years ago they moved down the street to the 500 block on Main (5 blocks back from the beach)  There's alot less foot traffic there but they say they get more business because there's accessible parking.

Anyway they have a fairly small menu.  A bunch of smoothies (and they were making smoothies long before they were popular) and they make a couple of sandwiches and soups.

The reason I go is for one thing and one thing only. That's their Turkey Avo sandwich specifically with fake soy turkey.  A friend of mine introduced me to them and since then I often get a craving that only Jan's and fulfill.  The sandwich will have a THICK chunk of turkey, like a almost a centimeter thick and it will have practically an entire avocado on it.  There is also a special mix of spices you can sprinkle on the sandwich.  They used to put this spice on the tables but you'll have to ask for it as they said it would get stolen.

And yes Jan does work there.