Back in American, this is all that Nissin Foods gives us.

I'm sure some great market research has gone into why that's all Americans really want.  I'd be curious to know if it's really true though.  They sell those in Japan too but in Japan, where ramen is elevated to a much higher status than in America, we get sooooo many more choices.  Even Nissin has an enormous variety that they don't sell in the states.

But, just this year it's been taken to an all new level and I believe Nissin started it with their new brand, Goota. 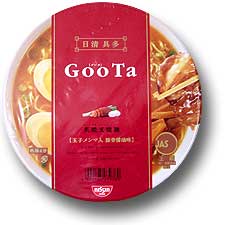 Here is a typical box/bowl of Goota. (pronouced Goo as in Gooey).  I've been told the Goo means all those extra things inside the ramen that are not noodles and this is where Goota shines.  Here is the typical contents of a Goota ramen.  (Just FYI, the ingredients here are not for the ramen above)

We have of course the bowl and the noodles but we also have... 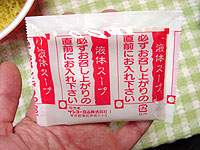 Liquid soup!  Not that dry stuff you normally get.  I've been told that this in particular is not that new for Japanese instant ramen but of course I've never seen it in America.

Next of we still have the dry stuff.  We have dry soup and spices 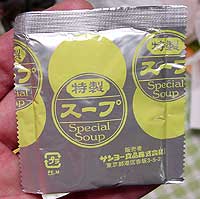 But biggest new addition is loads of REAL FOOD.  For example in this case we have real pork

Yes, that's real piece of pork, not a freeze dried piece of pork.  I don't know what took them until this year to get to this point.  It seems like a pretty obvious idea.  Maybe it wasn't until recently that packaging made this possible.  I don't know.  You can think of it as food in a can except instead of a can it's in a thick foil−plastic bag.

The instructions pretty much say that you should put all the dry ingredients in the bowl, poor boiling water into the bowl up to the line marked inside, close the lid and above the lid place all the non−dry things.  In this case the liquid soup and the pork (while still in their bags of course).  It works.  In 3 or 4 minutes your noodles are ready and the stuff placed on top of the lid is nice and warm and ready to be put on the ramen and gobbled up. 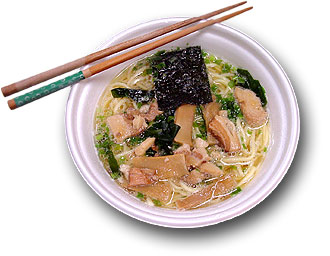 Here are a few of the recent ones I tried.  They are generally about $2.50 each.

These ramen can be found at pretty much any convenience store in Japan.  Most will have 20 to 30 types include these large bowls and some of the smaller ones.  Pretty much all convenience stores have a next to boiling water dispenser so you can instantly eat your instant ramen if you are so inclined.

If you live in an area with an Asian food market like LA you can get many great instant ramen bowls.  For example Mitsuwa, Marukai, Nijiya and possibly even Ranch 99 in the LA area all have a fairly large selection.  I used to get some pretty good tonkotsu ramen and some good kimchi spicy ramen.  I don't know if they are carrying Goota or similar brands yet.  Maybe we should all lobby Nissin and the other instant ramen companies to start carrying them in the states.  I don't think I could go back to eating a standard cup−of−noodles ever again. 😉

(ps: yes, I know ramen is a Chinese food but for some reason it seems like the Japanese get into it more)