Hong Kong, city of tall buildings. At least that's how I would describe it. You'd be hard pressed to find a building less than 10 stories tall and I suspect the average height is higher. Maybe I missed some suburb area with single story houses but as far as I could tell there is no such area. It's all tall buildings.

Tokyo has tall buildings but I'd bet the average is more like 3 to 5 stories.

The second thing that stuck out to me is there's 2 kinds of buildings. Brand spankin new tall glass skyscrapers and condos and then there's grungy old dirty apartment buildings. Sometimes they are right next to each other. I'm curious what makes them so dirty. Is it because it's a humid area so mold and other stuff grows quickly? Is it because the air is dirty and so dust and dirt collects on them. If you know please tell me. My hotel had a warning message left in my room about how they have to work hard to keep the windows clean so don't get startled if the you find a window cleaner outside your window once in a while.<img align="left" class="gman−border−cshadow" src="/travel/hong−kong/buildings2.jpg" width="200" height="280" alt="Well lived in" />

Here's one of the dirty buildings. You can probably see all the *living* going on.

I signed up for this vacation with a large travel agency in Japan (JTB). So large that they have their own ticketing spaces at several airports and they have people to take you to and from the airport to the hotels. You can even sign up for complete tour packages where every place, every meal and every thing else is already planned for you. It's probably not a bad idea sometimes and it would save you the trouble of having to plan any of it yourself.

For me I just signed up for the plane and hotel but they included the bus to and from the airport to the hotel along with a guide. The guides give out there cell phone number and say call them if you have any questions, need a suggestion or get lost.<img align="right" class="gman−border−cshadow" src="/travel/hong−kong/walkway.jpg" width="320" height="240" alt="Party on the bridge!!" /> The guide explained that Hong Kong is a mountainous area and that all the people live between the mountains and the ocean and therefore as there is no land they can only build up. All the buildings from the airport to downtown were 30 story apartment buildings

One thing that made me happy, I understood about 90% of the explanation the guide gave to everybody about Hong Kong even though it was all in Japanese.

Hong Kong the city is divided by water into two major parts. Hong Kong Island and Kowloon. There is major city on both parts though my impression was more living in Kowloon and more city on Hong Kong Island. On Hong Kong Island, many of the downtown buildings are connected by bridges and elevated walkways 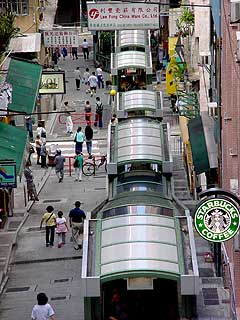 One thing that was interesting to me is that people seemed to be having picnics on these bridges. Thousands of people. They'd put down a blanket, pull out the food and games and have their picnic. I can only assume that there's just no where else to do it so they've resorted to the only space there is to do such a thing.

Hong Kong has the world's longest outdoor covered escalator. Actually it's not just one long escalator it's a bunch of short consecutive ones but it goes for about 800 meters or 1/2 a mile. Only up. You have to walk back down. It's kind of cool to ride and escalator through town. Almost like something out of the Jetsons.

It goes near Hong Kong's Soho area where there's supposedly lots of restaurants. I guess I saw a few but it didn't stick out to me. Maybe I just missed the correct street. I only took the escalators about half what up I think.<table title="money" align="center" class="gman−border−cshadow" bgcolor="#000000"> 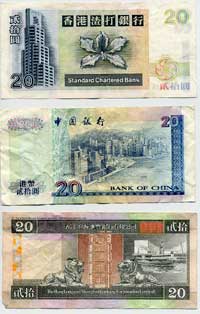 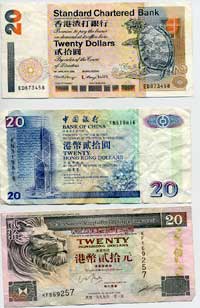 Other thing I found interesting is that Hong Kong money appears to be issued by several different banks. Above you can see 3 different styles of 20 dollar bills. At the time I went (August 2001) 1 dollar equaled about 7 Hong Kong dollars. Prices in terms of U.S. dollars are about the same as the U.S. or slightly cheaper but you have to divide by 7 so at first it's hard to buy a drink for 23 dollars until you realize that's about 3 dollars U.S.<img align="center" class="gman-border-cshadow" src="/travel/hong-kong/coins.jpg" width="320" height="209" alt="Too many coins" />

There's also lots of different coins. I wonder which country has the most coins in use. In the states we have the penny, nickel, dime, quarter which are often used and then there's the very very seldom used 50 cent piece, silver dollar and Susan B. Anthony. I guess that makes 7 but as we only use 4 of them it seems like less. In Hong Kong they have 7 also but they use all 7. Not only that but some of them are BIG and HEAVY. The 10 dollar and 5 dollar coins are each about 3 times thicker than a U.S. quarter. 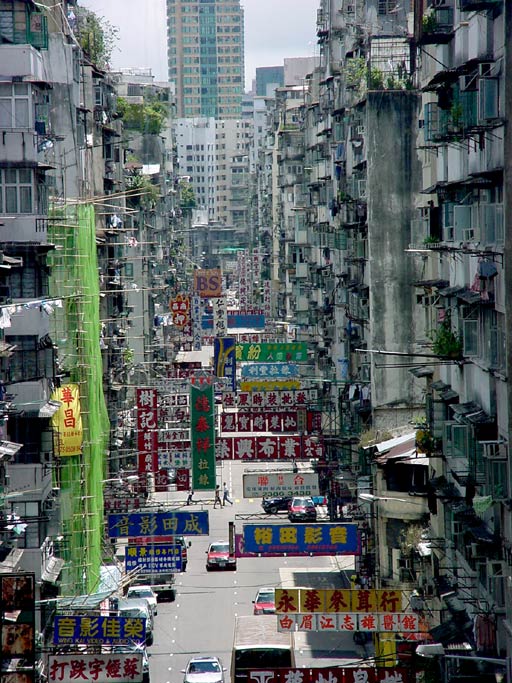 One day I went to the Kowloon side of Hong Kong by myself. I went to Sham Shui Po which is where a large computer mall is that me friend Voon had introduced me to the day before. Think of it like a computer swap meet except each exhibitor has a permanent space and of course all software is pirated. I think only big business buys legit software in Hong Kong.

I found an 8 story local mall. On the 8th floor was an arcade, an ice rink and an indoor roller coaster. That's also where I took the above picture from. 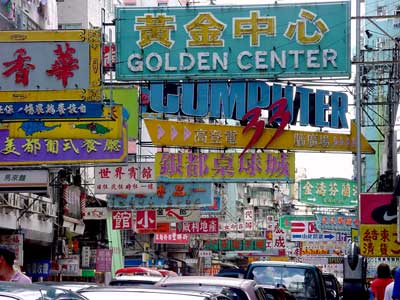 Hong Kong is also famous for it's hanging signs I think. Before I went to Hong Kong I had seen pictures like this but I think I always assumed it was just one or two special streets.<img align="center" class="gman-border-cshadow" src="/travel/hong-kong/night_signs.jpg" width="320" height="240" alt="Night time signs" />

Well in fact it's practically every single street. Some of the signs are enormous and some streets have so many signs it looks like they could probably provide rain cover.

The scary thing about them is they are all hang way over the street with nothing but a few cables holding them up. I'm curious how often they come crashing down. Hong Kong doesn't have earthquakes but they do have crazy tropical storms and typhoons that supposedly ruin windows, buildings and lives. Seems like they'd take down a few signs even easier. 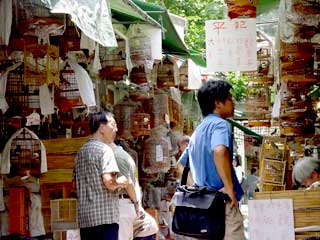 One day I checked out the Yuen Po St. Bird Garden and the surrounding area.

It's a place where there are about 20 or more stores that sell various kinds of birds. I read that the prettier the voice the more they go for.

It was pretty cool to see so many birds. Literally there are hundreds of not thousands of birds many in very very ornate cages. I have no idea what the different kinds of birds are. Some stores just sell cages. There are even special places to hang the birds as part of the park. 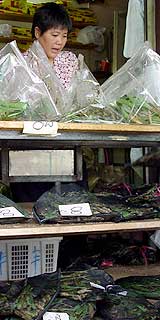 Even more interesting though for me was the bird food a couple of different shops were selling. Can you guess what this women on the right is selling. Is it bird seed. Nope. Some kind of special grass or plant. Nope.

It's GRASSHOPPERS!!!!. LIVE ONES all wiggling around inside those bags. I always thought meal worms were kind of gross (yea, they had those too) and even crickets but crickets are small. These grasshoppers were like 3 to 4 inches long. If that's the price of keeping a bird I don't think I could do it. How about you? 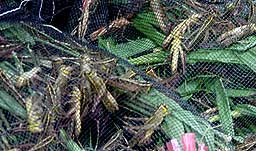 After that I checked out Flower Market Road which is right next door to the Bird Gardens. All kind of flowers being sold in about 20 or 30 flower shops. 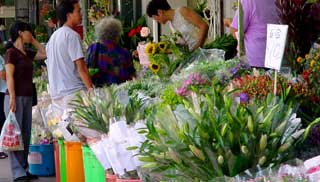 Something a little more random, on the Kowloon side there is a very large mall called Harbour City with over 700 stores. It's actually 4 different buildings but they are all connected internally so it's considered all one mall. 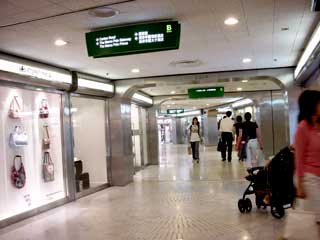 The second building I went into is C shaped and although I guess this shows the geek in me, after walking around the first floor for a while I realized that this mall looks like a set from Star Trek. All you'd have to do is change the store displays. The hallways are slightly curved, they are made from brushed aluminum or stainless steal. It's actually a little freaky.

That particular part of the mall seemed to have quite a few high end stereo stores for audiophiles types. Not my kind of thing but...

Finally the last night I went up to the bar in my hotel, the Sherton. It's sits on the Kowloon side and faces Hong Kong Island from the 18th floor so there's a great view. 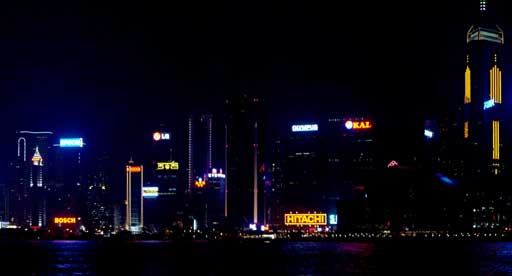 I regret not taking more pictures. For whatever reason I really wasn't in the mood to shoot everything. Maybe because it was so hot. Fortunately I'm use to it from Tokyo so I came prepared with a bunch of sweat towels and a fan. I would have been a mess without the towels and they got pretty darn soaked before the end of the day. So soaked that they were not dry by the next day.

Another idea I had was that I could just get a book with better pictures than I could take which actually I did but it then I realized that I can't legally post those pictures here to share so you'll just have to either visit me or go visit Hong Kong yourself.

Or wait for me to go again 😃