I had been wanting to have a real Japanese Hanabi Taikai experience for a while but you have to plan ahead.  I had been twice before but both times I got their late or the people I was going with didn't want to deal with the crowds and so I had either a far far view, like more than a mile away, or I just barely had a view at all. So, this year I was determined to try to do it right.

In Japan, Summer is Hanabi Taikai season.  From mid July actually all the way to October there are hundreds of hanabi taikai all around the country.  Some of the largest are HUGE!  To give you an example, if you've ever been to Disneyland, I believe at their show they use a few hundred fireworks and the show lasts for less than 10 minutes.  Here in Japan the big shows have between 10,000 and 30,000 fireworks!!  And the shows go for 60 to 90 minutes!!!

They have HUGE turn outs so you have to go early and grab a space.  I chose the Edogawa Hanabi Taikai which is on the south eastern side of Tokyo, actually kind of near Tokyo Disneyland. 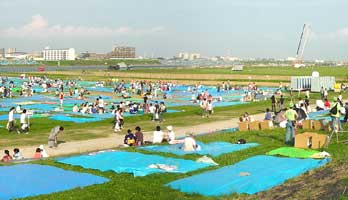 We got there at 3:30pm hoping we showed up early enough to get a space.  The cranes in the picture above are the firework launching area. As you can see we were already a couple hundred yards from the main area.  The entire area between where this picture was taken and beyond those cranes to the opposite side was already taken!  We asked and were told that many people came the night before and staked out a claim. One thing that's nice about the Japanese, they respect each other's space so even if you go put a mat down the night before you can pretty much expect that someone will not have removed it and taken your space the next day.

Above you can see the crowd growing over time.  Even though the entire place was mostly claimed people didn't show up until later slowly filing into their spaces they staked out earlier.

Of course with crowds so big the police are out in full force to make sure nobody gets hurt or rowdy.  As far as I know people getting rowdy in Japan is not that big a deal.  People might get drunk and loud but they rarely start fighting.  The biggest issue is probably just with so many people someone might get crushed.  In fact that happened at one hanabi taikai 2 years ago. 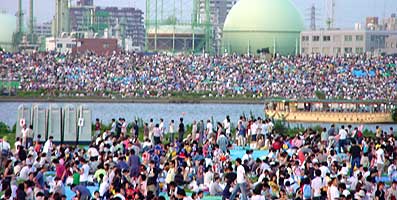 Both sides of the river are nothing but people!  This was August 2nd, 2003.  That seems to be Hanabi Taikai day because although during the summer festivals take place all over Japan every weekend and even weekdays too on this day there were no less than 29 of these things going on throughout Japan.

Another big thing about a summer hanabi taikai is dressing up for the part.  Not everybody does it, for the women maybe 1 out of 10 and for the men even less. But, it's great to see!  The women especially have very bright and colorful Yukata

They are not that expensive.  Uniqlo was selling some for like 4000 yen (about $34).  Most of them are more like 10000yen (about $84).  That doesn't include the Geta or wooden clogs (shoes) to go with it.  My favorite picture above is the one on the bottom left.  The girl has a yukata on, she's carrying a French parasol, and she's chatting away on her cell phone 😛

And then over course, at 7:15, they ask everybody to join in the countdown and they start the show!

These events are free.  Sometimes certain areas are roped off and you have to buy tickets but generally most of the area is free.  You just need to come soon enough to get in.

That's not as easy at is sounds.  As I mentioned, at this hanabi taikai there were around 1.4 million people!!!  There are only 3 train stations that are close to the area and so nearly all of those 1.4 million people have to come to one of those trains.  A friend that came late got stuck on the subway for 20 minutes because there were so many people getting off that getting them out of the station was a problem and so the trains backed up.  Then, walking from the station to the fireworks area with all the crowd means it's not moving fast.  A walk that might normally take 15 minutes could take 45 or more.

Still, it's totally worth it.  If you are in Japan between July 15th and mid September odds are there will be a hanabi taikai somewhere.  Find out where and go!