Well since I live in Japan of course I'm going to have to buy some gadgets.   Here's what I've bought so far.

This is my cel phone.  It was about $200 which is alot cheaper than a similar phone in America.  When I left America a phone with all these features would cost $750.  Fortunately this one is bilingual so I can set it to English mode.  It's got a zillion options including things like vibrate mode (instead of ringing) and 18 kinds of rings including the ability to program your own, for example a song.  It can send and receive messages as it has a lithium battery so it last for about 7 days on standby but only about 2 hours of talking.

There are a zillion ways to decorate your celphone here.  The simplest is to put a different strap on it.  They get more expensive though when you get a custom case ($80) or a flashing antenna ($60).  Oh, it's not called a cel phone it's called a Keitai Denwa.

Mini Disc is popular here (It's not in America).  I think the reason is is because so many people walk and ride the train instead of taking cars and they make Mini Disc players that are really small.  Mine is only slightly larger than the disc itsself but it's about as thick as 5 discs.  They make them even smaller, about as thick as 3 disks but those ones don't record.

They've also got a remote on the cable to the head phones so you can control it even when it's in your backpack.  I've found mine to be really useful.  I tape my Berlitz lessons and then listen to them on the train.  It has a lithium battery which lasts about 3 hours per charge.  You can also attach an external battery if you want more power.

It's also got a digital in line.  I'd never used one before but I have digital out on my CD player at home.  It's actually a fiber optic cable that connects my CD player to the Mini Disc and it's got some kind of protocol so it can record the signal digitally and copy the track marks.

The other two things I want are a new digital still camera and a digital video camera.   There isn't currently a digital still camera that I'm happy with so I'm waiting.   Here though Sony has this really cool new digital video camera.  It's about the size of your average point−and−shoot camera.  In otherwords it's REALLY SMALL!   Unfortunately it records to a small removable hard drive and it only stores 30 minutes.  I guess when it's full you need to connect it to your VCR and make a copy and then erase the hard drive.

And here's something complete ridiculous to put on this page:

This is the screen door to the laundry room.  I think it's better than the screen doors in the U.S.  Basically the top and the bottom are ona track and it unrolls in the center.  That means that when closed it has a much better seal so unlike most American doors the bugs can't get in around the edges.  I surprised nobody has tried to sell it in the U.S.

Another thing that's common is what they call Gum Syrup.  Instead of having sugar at the table they have little cups of sugar syrup (or sugar water.)  The cups are just like the little cream cups you see at an American coffee shop.  (The little disposable cups that you tear the top off).  What's the point?  The point is that it mixes with your drink much easier than sugar crystals.  In fact when I mentioned that they didn't have this in America my Japanese friends asked what we do and I had to explain that you had to stir your drink for a while.  Want to be rich?   Bring this to America and convince Starbucks that they should carry it and promote it as a plus over the other guys.

These are Japanese dishwashers.  They are about the size of a small microwave oven.  I'd say they was maybe 4 placesettings at the most.  Still they are pretty cool. 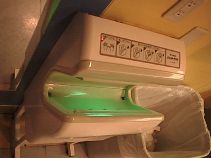 Can you guess what these are?  There's hand dryers in different restrooms.  You put on hand in the slots and they sucks the water off.  I think I prefer the more common type that just blows down.  It's funny but I think it was only about 2 years ago that I finally paid attention to the instructions of a common air hand dryer that says to RUB your hands under the air.  I'd usually just put my hands under the dryer for a few seconds and then wonder what they point was since my hands were not dry.  It didn't occur to me that if you rub your hands you spread the water out very thin is it will evaporate quickly and as you keep rubbing you spread out the remaining water.   Finally I get the point of air hand dryers.

This was interesting to me as it comes across to me as only in Japan.  These are desiger color 10BaseT computer network hubs!

This is the new Casio printing digital camera.  It costs about $130 and prints pictures like the ones on the right.  You can buy different kinds of printer paper with pre−printed frames. (The camera is officially called the "Casio Petit Colle Digital Seal Camera ZR−1"

I bought one so here are some close up pictures. 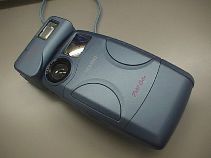 Here's the camera.  The lens is on the left and the front of the viewfinder is on the right.   It's mirrored so if you want to take a picture of yourself you can frame yourself in the mirror.  It took me a little while to figure that out. 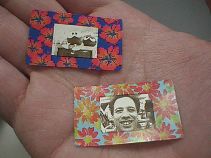 And here's a couple of pictures.  These are stickers.  They also make ones that are twice as wide.  Some you can put two pictures on and others one side is for a picture and the other is for a message for example a gift tag or an address card. 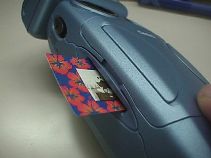 You put a sticker in the side and the camera sucks it in, prints on it and spits it back out.  Pretty cool. 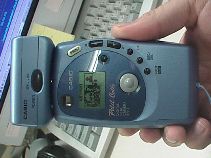 On the back is a small LCD display.  There are options to store the picture (used for the stickers that use two pictures).  Also for adjusting the contrast and for transfering pictures from one camera to another through a serial connection. 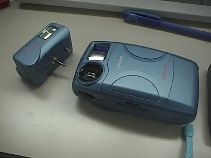 The flash unit is separate though it comes with the camera and it has it's own power switch so if you are not using it you can turn off the power or just un−plug it. 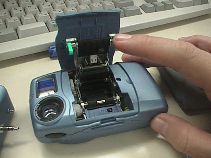 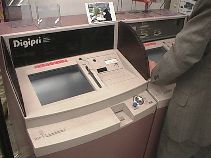 This is a digital camera photo printing station.  You can plug in CompactFlash, SmartMedia, PCMCIA, IrDA and a few others.  Once you get your pictures in then you can print them out.  Kind of neat specially if you don't have a printer or if you are traveling. 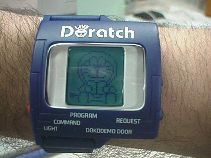 This is a Doratch.  Doraeman is a blue cat that is probably the most famous character in Japan.  He's got mor merchandise than I think even Mickey Mouse.   This is one of the latest things.  It's a watch which has a special door to see Doraemon called the Dokodemo Door (Anywhere door).  Normally the watch shows the front of a closed door.  If you press the Dokodemo Door button the door will open and you can see Doraeman doing whatever he happens to be doing at the time.  In the picture above you can see that he is reading.  Other times he'll be walking or sleeping or eating or taking a bath etc.  On holidays he might be doing something special.

Once the door is open you can press the request button to request the time.  He will usually look at his watch and then hold up a sign with the time one it.  Other times he'll hold his watch upto the door so you can see it.  If you ask him too much though or if you wake him up he might get angry and not tell you the time.

You can press the command button to demand the time. 😊 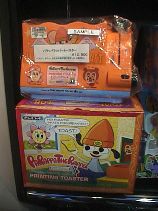 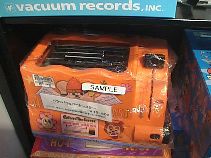 Here is the Parappa the Rapper toaster.  You put in some bread and it burns an image of Parappa into the side 😊

Many people have asked me where you can get this stuff.  Other than going to Japan and getting it yourself (you can go round trip to Japan for under $600)  I was told by TokyoPop that they will pretty much special order anything for you.  They would like you to have a model number or IPC number but otherwise they said they can find things even without that information.  I have not used them but if you have good luck with them please tell me.  You can find their website at http://www.tokyopop.com.

Too many people have asked about the Toaster above so, as I'm back in Japan right now I'll tell you.  One, the price written on one is $130.00.  If you want me to get it for you though you're going to have to pay me $350.  First you send me the money using Paypal.  I think you can look me up by my e−mail address.  E−mail me after you've sent the money and I will go look for it.  If I can find it within two weeks I'll get it and send it to you.  If I can't I'll send the money back through Paypal.  Of course it will take 2 to 6 weeks to arrive.  You cannot cancel!!  I can not in any way guarantee that it works or that it's in mint condition or anything.  The risk is all on your part.  If if you are upset about the price that's too bad for you.  It will cost at least $40 to send if not more on top of which I have to go to a store that is over an hour away and HOPE that they have it.  To do this will cost me $12 round trip.  If it's not at that store I have 2 or 3 more I can check.  Each store will cost me $12 round trip and take me a total of at least 3 hours EACH to travel too, look and return.  If I do find it I have to carry it, by hand, back to the my place and then I have to travel to a packing store on foot, get it wrapped, then travel on foot to the post office to ship it.

I urge you NOT to ask me to buy it.  Think about it.  You'll get it, you'll plug it in (you should probably get a Japanese power transformer), you'll toast at most 2 or 3 pieces of bread and then you'll never use it again.  It's not worth it.  And besides I don't think I've ever owned any toaster that didn't break.  If you really want a character toaster go get a Hello Kitty toaster which you can get at almost any Sanrio store in America.

Besides, at certain times of the year, if you have a good travel agent, you can fly round trip to Japan for under $400.  If you stay at a Weekly Mansion you can stay for a week for under $500 (you'll probably need a Japanese friend to be able to stay at Weekly Mansion) or you can stay at a Ryokan or some other cheaper place.  Wouldn't that be much better?