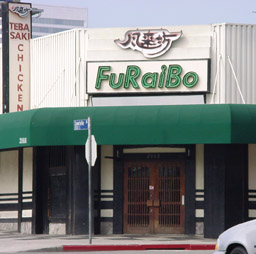 Directions: I'm not sure exactly how to get to Olympic just west of the 405.  I don't think there is an Olympic exit going North.  Basically you want to get on Sawtelle which is the first street west of the 405 on Olympic and then turn north (if you are going West toward Santa Monica you'd turn right.  You are now in Micro Tokyo.   Go one block north.  Furebo is on the right on the corner of the 2nd block.