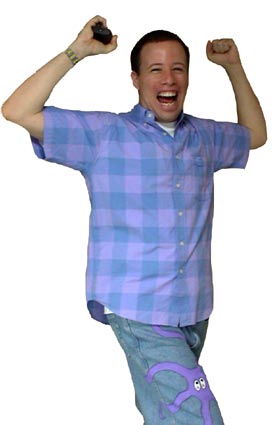 You're HERE!!  Hello.  This is my "Date the Greggman" page.  Hopefully if you are reading this page you are looking for somebody like ME.  Want to know more?  Read on.

Let's see.  As I'm living in Japan you might like to know that I'm an 35 year old American from the Los Angeles area.  I grew up just 3 miles (5km) from Disneyland so I've been there more times than I can count.  In fact since about 1991 I've had a yearly pass for about 5 of those last 10 years.  I used to hook up with my friends about once a week, usually on Sunday nights for dinner and people watching.

One thing about me I move ALOT.  Since I was 19 I've moved over 20 times.  That's more than once a year.  I've lived in Los Angeles California, Prove Utah, Philadelphia Pennsylvania, Baltimore Maryland, Cockeysville Maryland, San Francisco California, and Tokyo Japan which is where I am as I write this.  I never actually planned to move at all, things just come up and off I go.  I would love to stop moving so much but until I find my "home" I guess I'll just have to *go with the flow* and see where I land.

As for my career, if you've looked around on this website you might be able to tell I'm a programmer.  More specifically I'm a KICK ASS VIDEO GAME programmer.  So far I've had about 18 projects.  If you are interested here's a list of some of the games I've worked on. You may not know it but games take a hell of a lot of work.  Usually 1 to 2 years per game and it's getting worse.  As the machines get more and more powerful it takes more and more work to fill them up with stuff.  When I started in junior high school and through high school one programmer could do it all in 6 months or less.  Programming, art and sounds/music.  Now it takes teams of 15 to 30 people to make one

At the moment though I'm on break (or maybe I should call it a sabbatical).  For the last 10 months (since Oct 2000) I've been in Japan, going to Japanese school, studying Japanese fulltime 5 days a week, 4 hours a day.  Last time I lived in Japan I worked at Sega.  My reason for coming was to learn Japanese but of course I needed a job to survive.  Well, at Sega, maybe at all Japanese video game companies, they work 10am to 11:30pm EVERYDAY!.  With a 1 hour and 2 minute commute that pretty much means there's no way I was going to squeeze studying into that.

I think they thought I would just absorb it as I worked and maybe I would have but an opportunity came up to come back to the states, earn a big check and that's why I'm able to be here this year without a job and study fulltime.

At the moment I don't know how long I will be here.  Within the next few months I need to figure out where I'm going to work next.

Okay, so what can I tell you about me?  I'm I little on the shy side.  I don't think anybody would really describe me as shy but I do tend to remain quiet until I get to know somebody.  I'm working on that though.

Thinks I like: I like computers, technology, the internet and games.  Computers and the internet let me be creative whether it's creating games on the job or making my webpage or editing digital photos or making software or whatever.  I'd really like to meet somebody I can share that passion with.  I'd even like to make some CG or a video for fun.

Outside of that I like lots of the usual.  I like almost all kinds of movies.  Here's a list of some of the slightly less known ones.  I have probably about 300 movies in the form of DVDs, Laserdics and Videos. 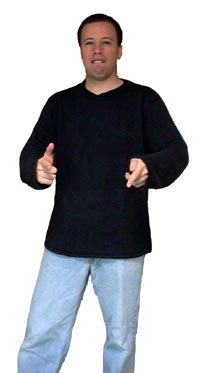 I think that comes from having a good job and no girlfriend.  I tend to spend lots of money on collecting stuff.  Maybe collecting is not the right word but I have 800 CDs, 45 watches, 70 stuffed animals, and too many books.

I prefer creative stuff to dramas.  I already have enough drama in my life that I don't usually need more from TV or Movies.  Sometimes they can be interesting though.  Creative stuff though is exciting because I get introduced to new ideas.

Watches to me are like jewelry for men.  At least that seems like a good excuse to me.  I generally only get cheaper ones like Swatch or Fossils so I'm not going crazy.

CDs, well, life would pretty much suck ass without music and I get tired of listening to the same thing over and over so unless I'm going to steal music with Napster (something I think is wrong) then I have to buy a new CD now and then.  Right now I especially like Swing and Techno but I can get into pretty much anything except maybe Country. 🤢  The last 5 CDs I bought were Faye Wong, Brian Setzer, Janet Jackson, Orbital and Depeche Mode.  One of my friends just gave me a CD which is a collection of tributes to a famous Enka singer.  It's pretty cool.

I think eating is one of the best reasons for living.  Eating good food and trying new things.  I'll eat almost anything at least once even though I think I have a weak stomach sometimes.  I pretty much go out to eat for nearly every meal at the moment but not that I go to fancy places.  Here in Japan, as best I can I try to go to a new place everyday for lunch though I'm keeping it on the cheap side.

I also like thrill rides. Though I haven't gone out of my way to ride any recently I love riding roller coasters and going to amusement parks.

I'm looking for someone around my age plus or minus a few years.  Someone that is playful and fun.  Preferable someone who is at least slightly more outgoing than me.  Someone who is intelligent is extremely important. I'm looking for someone to be my best friend.  Best friends do most things together.  I bring this up because some couples seem to live mostly separate lives.  They hang out with separate friends.  Go on separate vacations.  I don't actually know why they consider themselves couples but anyway that's not what I'm looking for.  I'm not saying I want to do everything together but generally best friends just want to do stuff together.  Best friends also talk about everything, share everything, work on stuff together.  Think of all the things you've done with your previous best friends.

Hope to hear from you.  Write me at here.