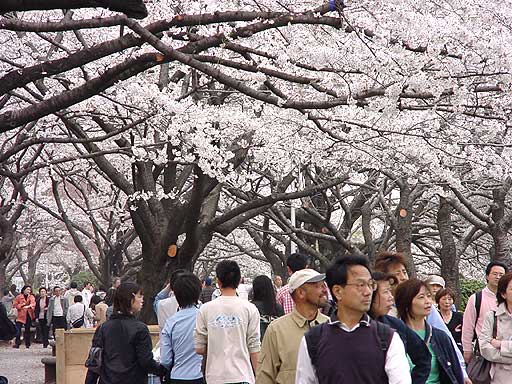 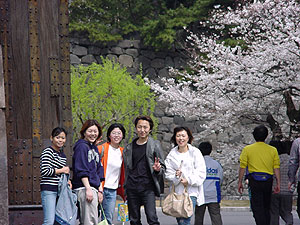 Most of my classmates were not in Japan last spring so this was their first time to see Hanami. I ran out and got a magazine with recommendations for places to go and we ended up checking out taking a pretty long path from Tokyo Station to Kudanshita Station. Probably a 2 to 3 mile walk.

We were a little worried because the cherry blossoms were very early this year but just how early we were not sure so we wondered if we'd get to see any blossoms. We got all assembled with one of our party being 30 minutes late and headed out. 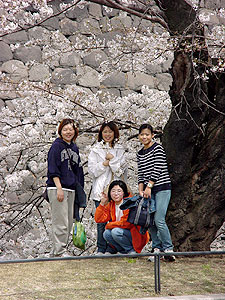 Our first stop was the front of the Imperial Castle near Tokyo Station which we were then supposed to follow the moat around clockwise until we got to Chidorigafuchi. Chee−doe−ree−ga−foo−chee

When we arrived at the first "green" park like area we were pretty disappointed. There was not a sakura tree in site that was blooming.

We arrived at a Hibiya park which according to our map should have quite a few sakara trees. It did have a few and they were blooming but they were around a dry dirt playground and as we had brought picnic lunches we wanted a nicer place to sit so we keep to our map and continued around the Imperial grounds. 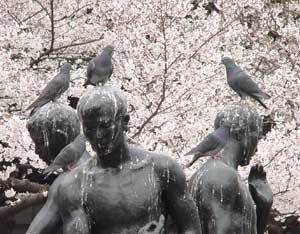 After that we walked by Sakuradamon which I had passed several times on the subway but I had never gotten off the subway at that station to see where I was. It is one of the old gates into the Imperial grounds. Specifically it's the Cherry Field Gate and as such there were a few beautiful sakura trees near the gate so we stopped to take some pictures.

We ended up eating lunch in front of the Japanese capital building and joked we should invite Prime Minister Koizumi to join us. 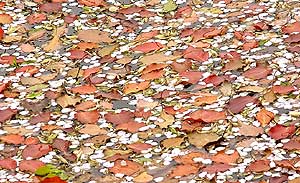 There's a small garden/park in front of the capital building and so we sat on some stairs in the garden and pigged out. Son−san is in a homestay program meaning that she is living with a Japanese family while studying Japanese and her homestay mother made us a feast!

We had all brought a little of our own food too and so we got stuffed. There were 6 of us but we easily had enough food for 12 people.

Unfortunately the wind was blowing that day and about half way through lunch a big gust of wind blew sand all over the food. :−. At least we were already stuffed. 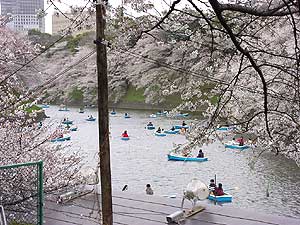 After lunch we continued on and finally got to Chidorigafuchi. It's a part of the moat around the Imperial grounds with sakura trees lining both shores and all the trees were in full bloom or mankai ("man" rhythms with pawn. "kai" rhythms with pie)

It was pretty amazing. Even the statues covered in bird droppings almost matched the beautiful trees. Okay, not quite 😃 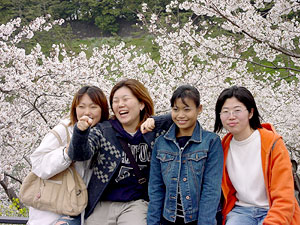 That area was packed. On one side of the river there are two paths and people were shuffling along like a slow traffic jam on both sides. One side going one way, the other side going the opposite way.

You could even rent row boats although the line to rent looked like it would be at least 1 to 2 hours to wait so we decided to pass on that. 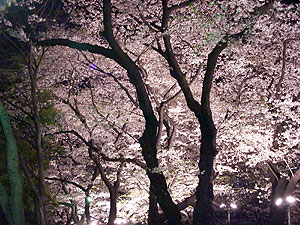 We wanted to come back and see them at night and 3 of us managed to make it back only to find out they were not going to turn on the lights until the next day. I guess that's to be expected from a government organized event. Even though Thursday was a holiday and even though the blossoms were in full bloom and zillions of people were there and about 1 out of 3 was asking the guard when the lights were going to come on nobody had the authority to turn on the dang lights!

About 4 days later I went back to check it out. Pretty awesome at night too though without a tripod almost none of my pictures came out.