Cafes, Cakes and Me

You would probably never guess it but Tokyo is probably one of the dessert capitals of the world.

One day I was looking for a place to eat lunch.  I came out of Shinjuku station on the east side, looked up and saw a sign for onigiri which at the time was a fairly new thing to find featured at a restaurant. So, I thought "what the heck" I'll check it out.  Here is what I found.

I had the onigiri but clearly that was not the point of this restaurant.  They had this large display case featuring all their tarts, cakes and pies and they are just mouth watering, jaw dropping gorgeous.

Most of them actually taste good too 😃

I don't remember the first one I tried.  This banana tart I've had 3 or 4 times and since I love bananas it's great!  I think I must have been at least 15 times since I found out about this place. I wonder how many inches that's added to my waist?  And, actually the slices are pretty large for Japan.  At least 60 percent of it is fruit so it must be good for you.  Yea, that's the ticket! 😃 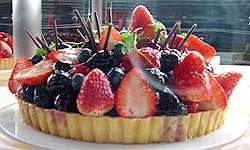 The place is called the Cafe Comme Ca (pronounced "comb saw") and is part of the Comme Ca corporation that has fashion and accessory stores all over Japan as well as other random stuff.  For example the Cafe Comme Ca in Shinjuku is on the 5th floor of a 5 story Comme Ca Mode store.  The first floor has things like organizers, paper clips and an ice cream stand.  The other 3 floors are clothes

There are so many types of tarts and cakes I had to keep going back and of course each friend I had I'd ask them if they had been and if the answer was no then of course I had to take them.  They change too and there are daily specials.

There are some interesting cultural ideas at work though.  A cafe in general and one that specializes in dessert is considered a *girls* place.  Of course this never bothered me.  First I don't believe in that kind of crap and second, if it is all full of women what could be better for me. 😉

But, it was funny to watch my friend Kyo.  He is from Taiwan as we went to different cafes he would look around the room and if there were no other men in the place he would point it out, "hey, we're the only guys here" and then sit nervously the entire time.

Maybe the deal is that most of them are not open that late and so given Japanese culture with the men working and the women staying home, only the women have time to go to a place that's not open till late at night.  Well, too bad for the men if that's the case.  More dessert for me 😉 I'm sure it's changing though.

Cafe Comme Ca quickly expanded.  There are now two in Shinjuku.  One in Harajuku.  One in Shibuya.  I think country wide there are over 50.  I've wondered if someone should start a place this cool in the states.  Making the tarts does not seem that hard.  I don't personally have the business know−how but whoever started the Cheesecake Factory could probably start the Tart Construction Works using this idea.  Maybe they will hire me as a consultant and I can taste test the tarts 😊

Another time my friend Kyo and I found ourselves in Omotesando which is known for having lots of cafes although most of them have pretty standard fare.  Nothing to write home about.  We wanted something good though so I e−mailed my friend Yuki on my cell phone and within a few minutes her reply told us there was a famous place just a few minutes walk from where we were.

It's called Qu'il Fait Bon and it was pretty awesome too although pretty small.  They also have a few stores around Tokyo and feature a very French decor.  They might actually be from France.  That day we ordered two slices each as we really wanted to try them out.

The place is very small and the people dealing with the tarts are standing directly behind the case preparing them right in front of you.  It's fun to watch why you are waiting for a seat.

Another place I've been a few times is the Cheesecake Cafe.  They are also a chain.  The two I've been to are the Shinjuku branch which is just a minute from the east exit Kinokuniya bookstore.

The is other is the Shibuya directly across from the station from the Hachiko exit in the 1092 building.  The menus are the same which is a few light pasta dishes and desserts.

The portions at Cheesecake Cafe are more normal for a Japanese restaurant which by American standards would be called puny or maybe even a rip−off at probably $5 a piece but I look at it as I get my dessert and as it's small I don't have to worry as much about getting fat. 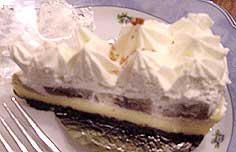 There are all kinds of cafes in Tokyo.  It's something I'm really going to miss when I come back to the states. I don't understand why there are not more of them in L.A.  It seems for dessert on all of giant L.A. we have like 3 places.  Cheesecake Cafe, Sweet Lady Jane and Manny's.

One thought is that in Japan with very small apartments etc people need a place to get out.  In L.A. we just invite our friends over to our place.  Hence less demand.

The basic definition of a cafe seems to be a place you can get dessert and tea.  If they have more food that's bonus.  Another is that they are generally casual. 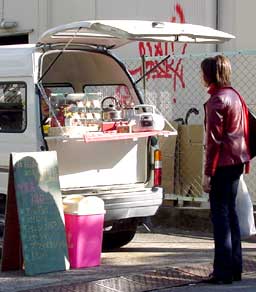 It seems like within the last few years there's been a cafe movement with cafes springing up all over the place.  I've been to one that looks like a ki ds club house and there is actually a tree growing through the building.  I've been to ones with only about 8 seats.  I've seen one where someone just pulled up a van, setup some tables around it and served out of their van.  There is one in the Virgin Megastore in Shinjuku that has about 30 iMacs/iBooks for free net access provide you buy some food.

There is even practically a cafe section of many bookstores with guides to lots of them.  As many of them are very small there is a lot of turnover so sometimes the guides will lead you somewhere that no longer exists.  My favorite guide is this one which has lots of pictures. 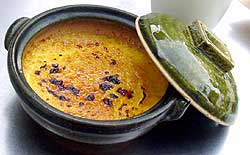 I've had other incredible non−tart, not cake desserts too at some of the smallest places.  Many of these places are posted in my restaurant section.  Check'em out. 😉