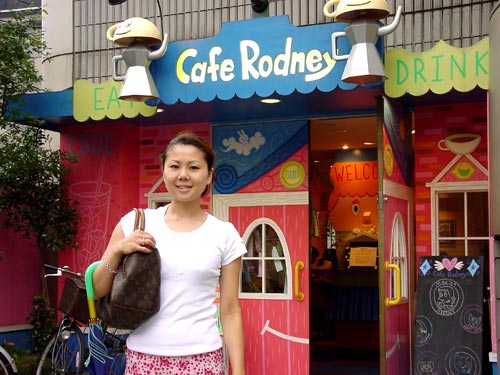 Just by chance I was out with my friend Miyuki and we happened upon Cafe Rodney. Rodney Alan Greenblat is the artist who designed Parappa the Rapper and Um Jamma Lammy as well as Thunder Bunny, the characters for Family Mart, and the stage and package design for the Japanese group Puffy and their TV show as well as several other companies. I don't think he's nearly as well known in America but here in Japan he's pretty huge.

His style is all about cute and fun. In the picture above you can see a face on the door as well as on the two tea pots on the sign. Even the chairs had happy characters on them. 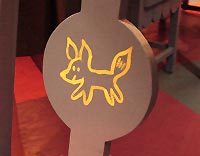 Like most Tokyo cafe's they have a pretty small menu. A few drinks, a few desserts and a few light lunch dishes. 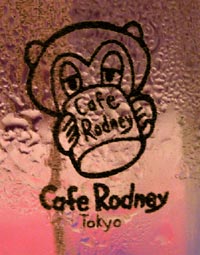 I had a tropical smoothie. Nothing to write home about but it did hit the spot for a muggy summer day in Tokyo. 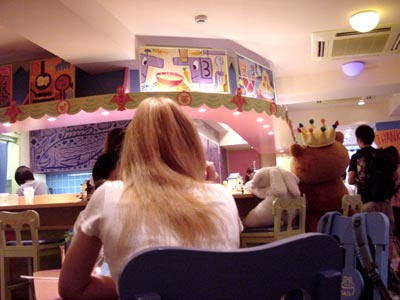 I didn't take a very good picture of the inside but basically every part of the cafe is decorated. Rodney's style is very busy. It's like you are at a cafe in Disneyland but busier. You can see PJ Berry and Thunder Bunny sitting at the counter above. On top of food and drinks they also sold some merchandise like T-Shirts and some of Rodney's books. 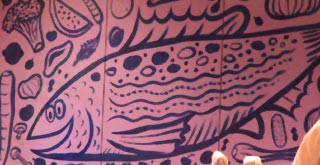 Behind the counter was the happiest about to be killed fish in the world ;-. At least with all the veggies drawn around him he looks like he's about to be made into lunch but clearly he's not too concerned 😉

If you want to check it out and you are in Tokyo it's in the Harajuku, Omotesando area. From Omotesando station walk toward Harajuku maybe 5 minutes and then turn right and walk into the neighborhood. It's maybe 5 minutes back from the main street along with lots of other boutiques and beauty salons. Here's a map

Also, the placemats had half-finished pictures on them with a request (in English) to finish the picture, turn it into the staff and maybe they'd put it on their website. Since it's in English it seems like most Japanese probably wouldn't read it but I guess quite a few people did because there's lots of pictures on the website. Maybe if I'm lucky mine will turn up 😉