Even though I've been in Japan nearly 2 years I've really never been to a Japanese Matsuri (festival). I've stumbled upon a few before especially near the temple in Shinjuku but probably the #1 thing about a Japanese Matsuri is all the food and since I found the other matsuris by accident and I had already eaten and didn't really feel like partaking in the festivities (ie, eating lots more).

The other thing that has prevented me from going is not having any friends. Something I'd like to talk about in more depth but not here.

Anyway, I was invited to the Azabu Juban Matsuri. Azabu Juban is a city in Tokyo. Where as most Matsuris are sponsored by various temples and the matsuri itself takes place around the temple the Azabu Juban Matsuri is not related to a temple. I don't know it's history but one of my friends said she thinks it's the largest matsuri in terms of booths which all Japanese matsuris have.

This particular matsuri is pretty huge. Covering an entire neighborhood and then some, there are probably 700 or more booths, 80 percent of them selling food. The only down part of that is that 90 percent of the food booths are selling 1 of about 10 kinds of food.

A Japanese matsuri is generally CROWDED. We're talking wall to wall people (or booth to booth). You couldn't stop in the middle of the road if you wanted to as you'd be pushed along by the crowd. It's a wonder there aren't more *incidents* but I guess the Japanese in particular are used to it from riding the trains every morning.

All the little taps you hear in those videos are that person either tapping the edge of the taiko drum or hitting the drumsticks together. They were mesmerizing to watch.

This particular festival is at night. 4pm to 9pm. 9pm is a little to soon to close up but they have to tear the entire thing down every night and rebuild it the next day and as the trains stop at 12 I guess that gives them 3 hours to clean up.

I'm curious how this stuff gets organized. It doesn't seem like we have all that many festivals in the states. We have things like the garlic festival, and the renaissance fare and we have air shows and state fairs. There are several festivals every single weekend in the summer in Japan including the big fireworks festivals which I again missed this summer. :−. There's also at least one a month or more around the various temples around Tokyo though most of them are probably not as big as this one.

I'd like to know if all the booths are run by individuals or if they are mostly run by organizations raising money for example. I don't think it's the later because there are no signs saying "support the troop #12" for example.

So far it has not gone commercial which is a good thing. The annoying thing about American festivals is except for the main event many of them have become so commercialized that you might as well go to the mall removing half the reason for going in the first place.

I really missed out on taking pictures of girls in YugataYukata. They are all wearing them to show off (and to have fun) so I'm pretty sure that would have all been happy to pose for a picture like the girls above. The biggest excuse being that it was so crowded that it would be hard to do

Maybe only 5% of the people there are in traditional clothes and of that 5% it's probably women 20 to 1. That's probably because the women's clothes are more interesting, brighter colors. They also put up their hair and carry special purses.

Here's a few I stole from Takashimaya's Web Page until I get a chance to take my more of my own. If you check out that page click the fish at the bottom.

I did manage to talk myself into wearing mine that a friend gave me a couple of years ago. 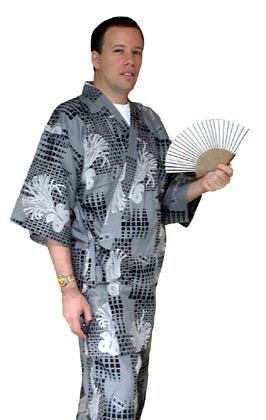 Most of the men's are more bland colors like this. I'm missing my obi (the belt). I wore a fanny pack instead for my obi since I needed to carry my camera and a few other things as well. 😊

I was a little scared to wear it because I wasn't sure anybody would be wearing them at this particular matsuri and I knew the friends I was going to meet would not. It though maybe it was really only a firework matsuri thing. I ended up asking a neighbor on the 1st floor of my building if she thought it was alright. She said it was a great idea.

Still, it's a little strange walking to the train station and riding and being the only person dressed up like this. I guess like of like being a clown for hire. It wasn't until I actually got to the matsuri and saw all the others that I was finally comfortable.

I did get alot of looks. I prefer to believe they were looks of attraction and not looks of *weirdo* 😉

Tags: japanfeature
Comments
Lining up to download a file
The Commune