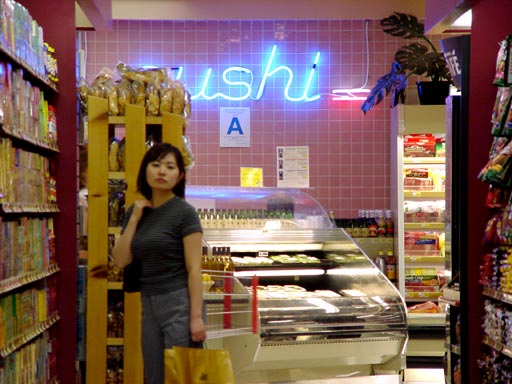 You can take this picture several ways.  You could look at her and see her as angry.  You could see the sushi sign, see that the "S" is covered leaving USHI which means "cow" in Japanese.  Whatever, I just liked the picture.

I also liked the woman.  In fact sometimes I thought I was falling for her even if she was like 12 years younger than me. She was one of my roommates for about 15 months.  For the first 9 months we were great friends.  We did quite a lot of stuff together.  But the last 9 months we hardly talked.  I never really understood why.  Part of it was that our schedules didn't match but it seems like there was more than that.  Like she actively wanted to avoid talking to me.  She claimed there was nothing wrong but now that we are not roommates I've tried to contact her a few times and she has not responded so clearly something was up.  I guess it will always be a mystery.